58. Captain Underpants and the Revolting Revenge of the Radioactive Robo-Boxers 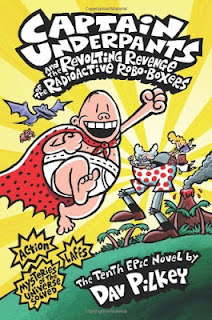 "When we last saw our heroes, George and Harold, they had been turned into evil zombie nerds doomed to roam a devastated, post apocalyptic planet for all eternity. But why, you might ask, didn't the amazing Captain Underpants save the boys from this frightening fate? Because Tippy Tinkletrousers and his time-traveling hijinks prevented George and Harold from creating Captain Underpants in the first place! Now, having changed the course of human history forever, they'll have to figure out a way to CHANGE IT BACK.
Could this be the end for Captain Underpants?!!"

I've read a handful of books by Pilkey but this is actually my first "Captain Underpants".  Now I'll be the first to admit this is not great literature but I'm not a book snob when it comes to funny, entertaining books whose main goal is to get kids reading either and Pilkey has that knack.  I like his sense of humour.  This book continues right where book 9 left off and includes a return of the villain Tippy Tinkletrousers, who is hilarious.  Involving a lot of time travel right back to the ice age and the "Big Bang Theory", including some future time travel and various characters meeting up with themselves in the past and the future this is an action-packed comedy, part text and part comic, though mostly text with lots of illustrations.  Pure silly fun.