48. A Question of Identity by Susan Hill 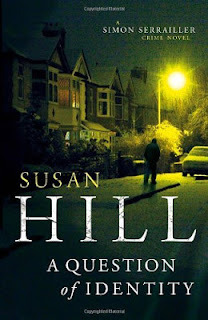 "Lafferton is struggling through a bitter winter, with heavy snowfalls paralysing the town, though at least the police can be sure the ram raiders who have been targeting antique and jewellers' shops will be lying low.
The biggest worry the elderly have is how to keep warm, until 82-year-old Doris Upcott is found strangled in her home, followed by the deaths of 2 other residents of the same sheltered housing complex. Each time, the murderer has left a unique signature at the crime scene, which should help DCS Simon Serrailler, desperate to identify him before he kills again.When links are found between these and 3 similar murders elsewhere, Serrailler is obliged to cross unfamiliar territory in his search for answers."

Probably the best book in the Serrailler series I've read!  A brilliant crime novel where we are taken inside the mind of the killer.  The book starts with some brief thoughts from the killer and then we are taken back to 2002 and a court case where a sadistic killer is found not guilty due to some fancy witness questioning on the stand.  Now in the present Simon is faced with a series of murders that fit the same MO but upon discovering the previous case that man is found to have disappeared without a trace.  All throughout the story the narrative switches occasionally to the killer's thoughts sometimes brief paragraphs others a couple of pages long and we are taken inside his mind to see what makes him tick, why he does what he does and what he gets out of it.  A consuming read that I just could not put down!  I would love to have given this full 5 stars but unfortunately I did figure out who the killer was as soon as the character appeared in the book; after his first scene he just didn't appear sincere to me and I didn't doubt for a second he would end up being the killer so I was kind of disappointed as I raced to the final few pages to find out that I had been right all along.  BTW, we do know the killer is a he right from the beginning so no spoiler there.  I'm prone to figuring out "whodunit" though so I've only docked the book 1/2 a star because otherwise I found this a brilliant read.