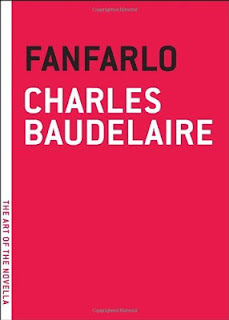 Fanfarlo by Charles Baudelaire. Translated by Edward K. Kaplan. (2.5/5)
The Art of the Novella

"Ten years before Baudelaire published his masterpiece, The Flowers of Evil, the great poet penned the only prose fiction of his career: La Fanfarlo. The novella describes the torrid real-life affair the poet had with Jean Duval, a dancer whose beauty and sexuality Baudelaire came to obsess over. The outcome is a work of raw emotional power and a clear distillation of the Parisian’s poetic genius. As Baudelaire himself said, “Always be a poet, even in prose.”"

This was the second selection from Melville House's Novella Book Club this month.  I don't generally get on well with French literature or historical books about France so even though I was game to give this short read my best effort I wasn't too impressed.  Very verbose with flowery and excessive language.  Paragraphs could have been written in a sentence or omitted altogether.  Divided mainly into 3 parts, one on the poet, one on the poet's friend, a spurned wife, and the last on the poet and an actress, Fanfarlo, and their love affair.  I really had not much of a clue what was going on until the end of the spurned wife's story where finally they get to the point and a small plot develops.  Baudelaire was a poet and this is supposed to be his only work of prose, which is good as I have no inclination to read him again.  But at least I feel I've broadened  my horizons a bit with this read and become a tad more [sic] edjificated :-)