39. The Lady and Her Monsters: A Tale of Dissections, Real-Life Dr. Frankensteins, and the Creation of Mary Shelley's Masterpiece by Roseanne Montillo 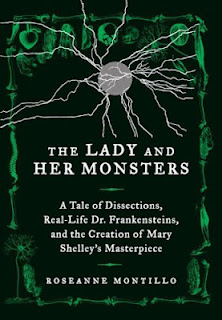 The Lady and Her Monsters: A Tale of Dissections, Real-Life Dr. Frankensteins, and the Creation of Mary Shelley's Masterpiece by Roseanne Montillo (5/5)

"Told with the verve and ghoulish fun of a Tim Burton film, The Lady and Her Monsters is a highly entertaining blend of literary history, lore, and early scientific exploration that traces the origins of the greatest horror story of all time–Mary Shelley's Frankenstein
Exploring the frightful milieu in which Frankenstein was written, Roseanne Montillo, an exciting new literary talent, recounts how Shelley's Victor Frankenstein mirrored actual scientists of the period. Montillo paints a rich portrait of Shelley and her husband, Percy Bysshe Shelley, and their contemporaries and their friend Lord Byron. Intellectually curious, they were artists, poets, and philosophers, united in captivation with the occultists and daring scientists risking their reputations and their immortal souls to advance our understanding of human anatomy and medicine.
These remarkable investigations could not be undertaken without the cutthroat grave robbers who prowled cemeteries for a supply of fresh corpses. The newly dead were used for both private and very public autopsies and dissections, as well as the most daring trials of all: attempts at human reanimation through the application of electricity.
Juxtaposing monstrous mechanization and rising industrialism with the sublime beauty and decadence of the legendary Romantics who defined the age, Montillo takes us into a world where poets become legends in salons and boudoirs; where fame-hungry "doctors" conduct shocking performances for rabid, wide-eyed audiences; and where maniacal body snatchers secretly toil in castle dungeons."

A fascinating read being even more than I had expected.  It is a biography of Mary Shelley but also contains detailed looks at the lives of many other people from a broad spectrum who were either related to Mary, influenced her or were a part of this period of interest in galvanic science and subsequently those who provided the corpses for the doctors to study and experiment on.  Captivating, riveting and shocking reading at many times.  I learnt of Mary's parents William Godwin, credited with the first detective novel, her mother Mary Wollstonecraft an outspoken feminist in the 1700s.  The gloomy lives of debauchery of both Percy Shelley and especially Lord Byron and Mary's sister Claire.  Then we also enter into the eerie early scientific world of galvanism, using electricity to animate corpses, in the hopes that it could somehow prove to help the ill, the paralysed.  Mary grew up in this world with bother her parents hosting parties for this type of intellectual society and her future husband, Percy being quite taken with the process.  Of course this topic lead easily into the underworld of resurrectionists, or simply put grave robbers, and eventually those who couldn't wait for a corpse so made their own such as the infamous Burke and Hare.  A treasure trove of information that kept me spellbound; it's no wonder Mary, as young as she was, had the interest and resources to write this Gothic tale of scientific horror (which at the time seemed shocking coming from a young female).  I re-read "Frankenstein" just prior to reading this work of non-fiction and am glad I did, but now that I know where Mary was coming from when she wrote it, including the deaths of her children, I know I will have a new appreciation for the work the next time I read it.