36. The Man That Corrupted Hadleyburg by Mark Twain 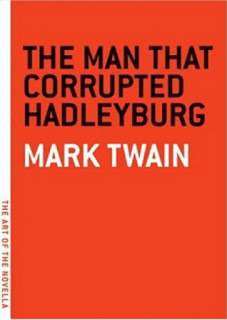 "Written on hotel stationery while Twain was in Europe on the run from American creditors, soon after the death of his daughter, The Man That Corrupted Hadleyburg is often cited as a work of bitter cynicism—a statement on America, to some, on the Dreyfus Case, to others—created by a weary author at the end of his career.

Others appreciate the work because it is, simply, Mark Twain at his best. The story of a mysterious stranger who orchestrates a fraud embarrassing the hypocritical citizens of “incorruptible” Hadleyburg. The novella is an exceptionally crafted work intertwining a devious and suspenseful plot with some of the wittiest dialogue Twain ever wrote. And like the most masterful literature, it subverts any notion of easy conclusion: is Hadleyburg ruined, or liberated? Is the mysterious stranger Satan, or a hero? Is this a book of revenge, or redemption? One thing is clear: this brilliant novella is a complex and compassionate consideration of the human character by a master at the height of his form."

Loved this comic yet profound story of a town that held itself to a virtue that it had not allowed itself to be tested against.  When they are tested they're found sadly lacking.  Wonderful humour and satire on the state of the 'holier-than-thou' mindset of some people and yet in the end Twain shows how one can be at one's best when not consciously thinking of putting the other man first for one's own gain.  Yet this is a circular farce as the characters can never be satisfied and find the guilt of being "found out" too strong to bear that they ruin the reputations of each other even when they think they have the best intentions in mind.  Twain's moral is that one cannot overcome temptation if one has never been tempted.  An entertaining and humorous satire. (US) - (Canada) - (Kindle)