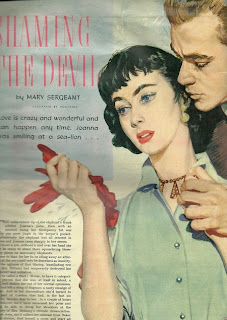 "Shaming the Devil" by Mary Sergeant
a short story

First Sentence:  "The india-rubber tip of the elephant's trunk nibbled Joanna's palm, then with an insolent swing her threepenny bit was merely one more jingle in the keeper's pocket."

Last Sentence:  "And to me," he whispered. "The most beautiful sense in the world."

Author:  I can't find anything about the author, but I have found two books written by a Mary Sergeant in the early 1950s published in England (as was this magazine).  I can't find any information about the books either but from the titles they sound like romances, perhaps Gothic romance.  Certainly a good chance this is the same author in question.

I actually really enjoyed this story even though it was quite trite.  An orphan brought up by a widowed aunt who suddenly dies at age sixty.  Now the nineteen year old is forced to move to the city and fend for herself.  She has conflicting ideas.  A modern woman of the mid-fifties, she is quite capable of taking care of herself and working and yet, of course, her ultimate goal is to get married.  She finds herself in a desperate situation as she's been fired from her current position as housekeeper for "stealing" and has no where to live.  Fuming, ruminating, planning at the zoo she encounters a man.  The man is jobless also as he's just told his boss what he thinks of him.  A fun little whirlwind of banter as they meet and fall in love.  Quite frivolous and old-fashioned but well written and enjoyable.
Labels: 1955 romance short stories women's fiction