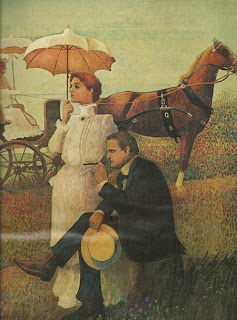 First Sentence:  "Bitter things dried behind the eyes of Miss Ella like garlic on a string before an open fire."

Last Sentence:  "She drove with Aunt Ella in the afternoons, took an interest in the tiny church, and all the time the rims about her eyes grew redder and redder, like those of a person leaning over a hot fire, but she was not a kitchen sort of person, withal."

Author:  No need to look up who this author is, the wife of author F. Scott Fitzgerald.  I did do some searching to find out about the story though.  The magazine mentions that the story has been "long lost and now happily rediscovered".  In my brief research I found that when mentioning Zelda's short stories this one was often mentioned by name as being of high quality, so it was quite exciting to find its run here in this magazine.  I had not ever read anything by Zelda, though I have read F. Scott.

I can't say I was particularly impressed with the story.  The narrator introduces himself as someone who was in love with Miss Ella once and then he goes on to describe her now.  Then at a certain point he goes back to her past describing her great love story which became a love triangle and the tragedy it ended in leaving Miss Ella a rather pathetic character.  The narrator never identifies himself but the reader can make an assumption to his identity by the end of the story.  I don't believe Miss Ella is written to be pathetic but to be seen more as a victim of the tragedy of love.  A case of "it is better to have loved and lost than to have never loved at all" perhaps.  Personally, I have no sympathy for her.  She made her own decisions and ultimately makes all three of the persons in her triangle unhappy.  One tragically so.  Yet, she is not responsible for another's actions, but the story seems to want us to pity her for taking on the part of the tragic woman.  She could have easily made herself and the other man happy by going on with life, but instead the two of them lead a forlorn, anguished existence instead.  I don't believe any of these people felt "love" for each other.  They get no sympathy from me; some people choose to be unhappy and actually revel in it. The writing was somewhat dramatic and I'm not sure if I'd read her again, on purpose, but would if I came across her in an anthology.
Labels: 1971 short stories southern fiction women's fiction