9. May Day by F. Scott Fitzgerald 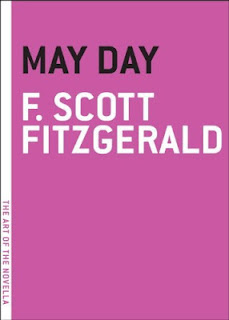 May Day by F. Scott Fitzgerald (US) - (Canada) - (Kindle)
The Art of the Novella Series

First sentence: "At nine o'clock on the morning of the first of May, 1919, a young man spoke to the room clerk at the Biltmore Hotel, asking if Mr. Phillip Dean were registered there, and if so, could he be connected with Mr. Dean's rooms."

Publisher's Summary: "Although F. Scott Fitzgerald is known for the kind of subtle, polished social commentary found in his masterpiece The Great Gatsby, his little-known novella May Day is unique in that it is the most raw, direct political commentary he ever wrote, and one of the most desperate works in his oeuvre.

It is a tale of the brutalities of the American class system—of privileged college boys, soldiers returned from a bloody war, and a group of intellectual left-wing journalists, all coming into confrontation in the heart of New York City on May Day at the end of World War I. Fitzgerald’s fine eye for detail is on special display and his relentless plot leads to one of his most shocking climaxes, in what is the first and only stand alone version of this rarity."


Acquired:  I joined Melville House's NOVELLA SUBSCRIPTION SERIES and this was one of the two December selections.

Reason for Reading:  I've decided to try the club for 6 months and plan to read the two selections, the month following their arrival.  Hence this is my January read.

I've read several of Fitzgerald's novels and short stories and find him an interesting author.  This title was new for me and I looked forward to reading it.  The story is explained as a sample of American class systems but I'm not sure I agree with that.  Class structure doesn't really exist in America the same way it does in Britain which I am more familiar with, where your class was a birthright.  Americans earned there way to their class level but then there was (and still is) the problem of the youth, the ones who didn't earn their way into the social position they find themselves.

Anyway this story revolves around several groups of people from different walks of life who all ultimately intermingle one fateful May Day evening and the reader is thrown into their mindsets, thoughts and actions when given the freedom to act of their own free will.  We also see how the end of WWI and the return to 'civilization' has affected these people.  The young college men who left to fight the war, some come back the same, others changed.  Some still belong to their social status, others have lost it and the main character of this story is a young man who has lost his money, his status, his morals and his self-respect.  He has gotten himself in desperate trouble with a lady (what exactly is not mentioned, but it is not hard to imagine)  The woman is presented as malicious, until we actually meet her near the end of the story.  Socialist journalists and carefree debutantes clash with freshly returned soldiers from the lower ranks, marking two extremes in ideology.  All come together in the end where death and tragedy ensue but sympathy (mine at least) does not lie with the one who it is perhaps intended to lie with.  I think the person most injured in this whole tale is the poor woman who had the unfortunate fate of falling in love with the young college man.  An intriguing story!