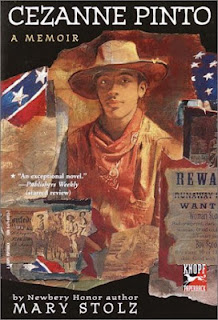 Cezanne Pinto: A Memoir by Mary Stolz (US) - (Canada)

First sentence: "In 1860, when I ran from the plantation in Virginia, I decided to be twelve years old"

Publisher's Summary: ``From a Newbery Honor author comes a rich historical novel, at once a fictionalized slave narrative and a riveting adventure story. Near the end of his life, Cezanne Pinto recalls his daring childhood escape from slavery and the varied landscapes of his hard-won freedom.``

Reason for Reading: I'm always interested in reading books on this topic, from this period and especially when they contain the Canadian connection.  Plus this is a favourite author from my youth.

First, despite the book`s title, this is a work of fiction about a fictional character.  Written as the story of an octogenarian writing a memoir of his life from just prior to escape from slavery until he reaches manhood.  We briefly experience Cezanne`s slavery and then more of it is told in flashbacks later on in the memoir.  He tells of how he and the plantation's cook escaped together from Virginia to Pennsylvania via the Underground Railroad and how freedom was not ensured until they had crossed the border into Canada.  We learn of his time in Canada until he reaches a reasonable age to journey south again to Texas where he knows his mother was sold off to and here he joins the Union Army for a short time before the War comes to an end.  The story continues on with Cezanne's turning ranch hand and finally a cowboy for the remainder of his teen years and this is where the old man leaves off his tale, giving us throughout the memoir some glimpses into what became of him in later life.

The book contains no real-life characters and yet Cezanne is planted firmly in historical context and reference to people of the day is frequently made especially Harriet Tubman, Frederick Douglass and Abraham Lincoln.  A truly poignant story from a young black teen's point of view.  The one point of contention with the book that may make it hard for some readers is the heavy use of black southern dialect of the time period.  However, it's use is of import and a fine literary device used to tell this story, which one can appreciate once the book has been read.  I admit it annoyed me at first, for quite some time; but there is a point to it which reflects Cezanne's growth towards freedom and becoming his own man that make it a worthy inclusion to the story.  A great read for upcoming Black History Month and again for those looking for the Canadian connection to this topic.