16. Bartleby The Scrivener by Herman Melville 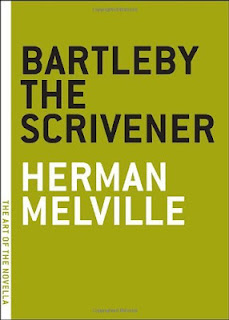 Bartleby The Scrivener: A Story of Wall Street by Herman Melville (US) - (Canada) - (Kindle)
The Art of the Novella Series

First sentence: "I am a rather elderly man."

Publisher's Summary: "“I would prefer not to.”

Academics hail it as the beginning of modernism, but to readers around the world—even those daunted by Moby-Dick—Bartleby the Scrivener is simply one of the most absorbing and moving novellas ever. Set in the mid-19th century on New York City’s Wall Street, it was also, perhaps, Herman Melville’s most prescient story: what if a young man caught up in the rat race of commerce finally just said, “I would prefer not to”?

The tale is one of the final works of fiction published by Melville before, slipping into despair over the continuing critical dismissal of his work after Moby-Dick, he abandoned publishing fiction. The work is presented here exactly as it was originally published in Putnam’s magazine—to, sadly, critical disdain.."

Acquired:  I joined Melville House's NOVELLA SUBSCRIPTION SERIES and this was one of the two December selections.

Reason for Reading:  I've decided to try the club for 6 months and plan to read the two selections, the month following their arrival.  Hence this is my second January read.

I was not actually looking forward to this.  I once tried to read "Moby Dick" and failed miserably.  I cannot recall if I've run across Melville in anthologies but if I have obviously it is not something that I've remembered.  Melville's writing style is a touch difficult for me and I found this a bit difficult to get into with the first several pages long-winded.  However, this changed quite rapidly and I became quite smitten with this story and must say it was not Bartleby I was most intrigued with but the narrator.  Bartleby is a most curious fellow, one who starts work in his position as a copyist, but gentlemanly refuses to do any other work by politely saying "I prefer not to." to any such requests. Only speaking when spoken to, this solitary man seems to always be present at work and when not working diligently is seen standing staring into space or out the window at a view of a brick wall.  His condition deteriorates until he eventually "prefers not to" work at all, leave the premises, or be let go from his position.  He becomes a peculiar, perhaps mentally unbalanced, perhaps supernaturally guided (what does he live upon?) character.

However, I found my interest laying mostly with the character of the narrator, a lawyer, the Master in Chancery for the state of New York.  At first impressed with his new employee's fast and diligent output of quality work, he starts to notice the man's peculiarities.  When Bartleby virtually refuses to engage in any other work than copying the lawyer is flummoxed, leaving him be and making up reasons for the man's behaviour.  This is in character with the lawyer though as he has done the same with his two other employees, one who is disagreeable in the mornings, the other in the afternoons.  The lawyer has learned to work around this and sympathize with the men by inventing character flaws and health reasons for their behaviour.  Bartleby, however, becomes unfathomable and yet the lawyer continues to show him kindness and think the best of him.  Things become intense though once the lawyer finds Bartleby in dishabille in his chambers early one morning, doors locked from the inside and the lawyer finds that he is allowing himself to walk around the block several times upon Bartleby's orders.  From this point on Bartelby becomes the one with the power and the lawyer eventually must leave his own chambers and move elsewhere to be rid of the man; this then starts a downward spiral of events for Bartleby which he can no longer control nor the lawyer's aid be accepted.

I found this story entirely intriguing and a curious look into the human condition.  I honestly don't know what to make of it; what is the point or moral being made here.  Even though I don't share this viewpoint, I do feel that many readers may find themselves siding with Bartelby and perhaps finding this a story of the downward drudgery of the clerical worker's monotonous plight.  But I felt Bartelby went into this position with a chip on his shoulder and I see it more of a psychological tale of how the lawyer tries to help someone who obviously is in need of help both socially and mentally and yet there is only so much one can do to help another when they are unwilling to help themselves.  Thought-provoking.
Labels: 1853 2010 classics novella short stories