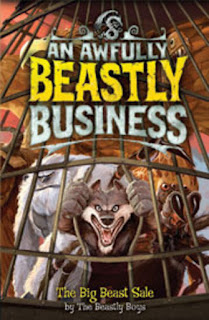 First sentence: "One cold winter's evening, a man in a long fur coat strode along the snowy streets of Capitol City."

Publisher's Summary: "The sixth title in the exciting adventure-mystery series about a sanctuary for dragons, ogres, werewolves, and other fantastical creatures

Ulf the werewolf is on his most dangerous adventure yet—to Capitol City, where the wicked Baron Marackai is plotting the return of the beast trade and the end of the Royal Society for the Prevention of Cruelty to Beasts (RSPCB). With the public calling for beasts to be banished from the city, or worse still, destroyed, it's up to Ulf to protect them and get to the bottom of the mysterious events. This time, the future of all beasts depends on it."


Acquired: Purchased a copy from an online retailer.

Reason for Reading: Next (and last) book in the series.

I've been reading this series aloud to my son since the first book was published in North America in 2009.  We've been holding off on reading this one, even though we've owned it for over a year, because ds did not want to come to the end of the series.  But he finally decided it was time to go ahead with it.  I don't have a lot to say as the book totally lives up to what we had expected from the series at this point.  The story went into Ulf's past a bit which was satisfying, filling in some gaps about his character and all the regulars turned up and played active roles in the finale.  The other books do follow a similar format and this one veered off that path somewhat to give a complete wrap-up story with both the protagonist and antagonist getting their just rewards in the end.  Ds really enjoyed this book (and the whole series); it has a place of pride on his bookshelf.  I highly recommend it as a fun middle grade fantasy.  One interesting bit of trivia we found out while reading this book:  I was reading a short story where the Scandinavian detective's first name was Ulf and it was explained that "ulf" was the Danish word for "wolf".  So now we know why our main character had such a strange name!
Labels: 2011 fantasy MG