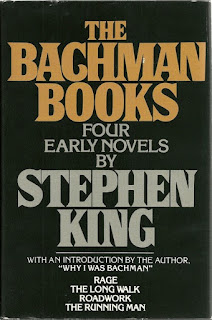 First sentence: "He kept doing things without letting himself think about them."

Publisher's Summary: "They're tearing down Bart Dawes's home, leveling his memories, and destroying his past, all for a new highway extension. Funny what that kind of progress can do to a man. Scary, too."


Acquired:  Purchased the omnibus edition from a used book store.  This is the same edition I bought new when it first came out.

Reason for Reading:  I'm re/reading Stephen King's works in chronological order and this was next in line.

This is my first re-read that I went into it with absolutely no memory of the story whatsoever.  And my copy only has some vague sentence about an angry man fighting back as a summary so I was none the wiser from that.  As I read it really didn't come back to me either, which is strange as I completely remember the other three in this book.

This is a hard book for me to review as it got better as I read it.  Honestly, I was quite bored for the first half and didn't really get hooked until close to the end when the excitement built.  This is a story that tries too hard to show the reader the mental breakdown of a man.  One who looses it and goes out "guns blazing".  When we meet Bart he's already well down the road to no return, hearing a voice and talking with it.  The book takes a long time to slowly let the reader know who this voice is and what the whole story behind it is and this is part of the book's slowness and what made it such a bland read for the most part.  Now, even though I seem negative here; the book wasn't bad; in fact it was good.  This story is a thinker.  Bart is 'crazy' when we meet him and in my mind the deeper he goes into his insanity the saner he becomes, until at the end of the book when he can be viewed as a madman, he is at his ultimate sanest moment in the entire book.   He has taken himself where he wanted to end up even though he didn't know it as far back as a few years ago when "the incident" happened and he's enjoyed these last weeks getting there.  I was satisfied with the read at the end, even though I had a hard time really getting into it.

This is the first Bachman that I truly felt was King.  The writing style, the stream of consciousness, the dialogue are all classic King and thinking back I can see true fans of the time putting the clues together at this point and outing King as Bachman (or at least suspecting) with this book.

When I read a King, I always look out for connections to other books and the only one I noticed here was one of the laundry machines was called The Mangler.  This is the name of a machine (perhaps even the title?) in a short story in "Night Shift".