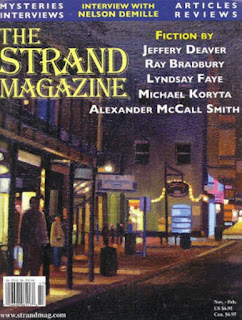 First sentence: "The very first letter Frederick Lowell slit open and read at his desk Monday morning would, he realized, change the course of history."


Reason for Reading: I enjoyed the last issue (my first time reading this magazine) so much I just had to get the next one.

I had heard of every author in this issue and actually read three of them, which made me excited to read all the stories.  Unfortunately, only the first and last stories were excellent, with the middle three being mediocre or less.  However, I wouldn't say I was disappointed with the magazine at all, as I very much enjoy reading the book advertisements throughout and the reviews at the end.  I have no interest in author interviews so do not read them; there is one with Nelson Demille (an author I've never read) and the article is again on the Strand Critics Award which didn't interest me either. I'm sounding negative here but overall as you see by my rating it was an enjoyable experience; Good.  And I'm certainly going to pick up the next issue!

1. The Sequel by Jeffrey Deaver. Illustration Jeffrey B. McKeever - Inspired by last month's "found" story by James Cain, Deaver wrote this story specifically for this magazine about the search for a possible sequel to a 1960s bestselling "Great American Novel".  A longish story this was a great mystery with the late author's lawyer playing amateur detective.  Throw in a cast of eccentric heirs & several twists and you come up with a fun story with an unexpected ending.  I've only read one novel by Deaver (loved it!) and have had him on my tbr list forever.  This story confirms that I must add him to my rotation of current authors.  (5/5)

2.  The Adventure of the Lightless Maiden by Lyndsay Faye. Illustration by Jeffrey B. McKeever - Faye writes Sherlock Holmes pastiches and I enjoyed the story in the last issue very much.  This one here was a let down though.  I like Faye's writing and she presents Holmes and Watson well carrying on Doyle's characters as established yet adding a bit extra to them that I can appreciate as a fan of Holmes.  However this story was so easy to figure out.  I knew what Holmes was about as soon as he did it and when he went to observe the whole situation I knew what was really going on too!  Not very exciting... It also involves Holmes in a case about ghosts and spiritualists, which of course are fakes but to hear Holmes deride them when we know how Doyle actually belonged to this movement just doesn't sit well to me.  (2/5)

3.  Midwinter Interlude by Alexander McCall Smith.  Illustration by Colin Nitta. - I have not read McCall Smith before though he is forever on my tbr list so I was interested in finally sampling him. This was not a great example of his writing though, I presume.  This is a bit of tongue-in-cheek fun with the popularity of Scandinavian crime these days.  This quite short story playfully makes sport of the genre while telling a tale of a Swedish detective.  This is a Christmas story but isn't really a mystery, no crime or anything.  Acceptable. (3/5)

4. Dear Santa by Ray Bradbury - Very short story, two magazine pages including a huge illustration.  Uh, kind of a whimsical story where a boy has to convince Santa (who is just some guy) to believe in himself. Boring and disappointing, as I do like Bradbury. (1/5)

5. A People Person by Michael Koryta -  This author is on my tbr list and I have one of his books which I hope to get to soon so I was looking forward to this taste of his writing.  It did not disappoint.  A crime story and a character study of the number one man to a mafia boss.  A very interesting story and I really liked the character profile.  (4/5)