Short Story: "There'll Be Some Changes Made" by Don Wall 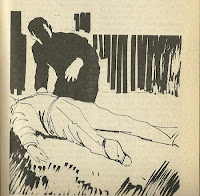 "There'll Be Some Changes Made" by Don Wall
a short story

Last Sentence:  "Like you've been sayin', gents, maybe this town needs some changes."

Author: I can only find mention of one author "Don Wall" who, starting in the '80s, wrote about his experiences in the South Pacific during WWII, where he eventually became a POW.  His work is very topic specific and all non-fiction, so I'm doubting this is the same author.

A fun typical crime story in which the hick town Chief of Police surprises the "powers-that-be" by solving his first murder very efficiently.  A man drops dead in a bar.  He was rich and hated by many local men because of his philandering, womanizing ways.  Just prior to his death a professor had come in for a beer, walked over to the man, told him to stay away from his wife, poured his beer down his shirt, then proceeded to have his lights punched out by said man before he limped away.  The professor becomes a suspect, but the beer he poured on the man contained no contaminants.  It takes transplanted Texan Chief of Police, Paul Jones to solve the crime.  A good read, fun to watch the truth unravel, but not exactly mysterious or thrilling.
Labels: 1977 crime mystery short stories