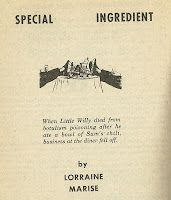 Last Sentence:  "You can say that again."

Author: I can find no information on this author other than she's published other stories for this magazine.

I enjoyed this little crime story which had a very definitive seventies feel to it.  A police officer comes into an empty diner sits down and starts to chat with the owner.  Turns out "Little Willy" died there the other day of botulism poisoning, the diner was shut down, inspected and given the all clear but now no customers are returning.  At first the victim sounds to be a child but the reader is soon put wise when we learn "Little Willy" was the local bookie around these parts, something the officer hadn't known.  He'd suspected Willy was up to something but hadn't clued in yet.  Well the conversation continues, the owner starts to tell the cop an awful lot of information about botulism poisoning and how it works, how long it takes, what your chances are if you don't get help, etc.  Officer Moran wonder's without much thought as to how he knows all this information.  As Moran makes a phone call, he happens to see the owner sprinkling something in his stew.  Back at the counter, when asked the owner says it's his "special ingredient", Moran agrees the stew does taste better than what you expect at a diner.

At this point the reader's thoughts are taking a certain turn as to what has occurred here and may perhaps occur again?  This does not appear to be the right track.  Officer Moran only has a few tastes than states he's just not hungry and leaves.  He then goes on to visit the owner of another deli down the street whose business is booming since the incident at the first place.  Here we learn who was in cahoots with who, who poisoned Little Willy and why and all seems straightforward and yet I'm left wondering just how Officer Moran will be feeling in say, perhaps, twelve hours.  Decent bit of revenge.
Labels: 1977 mystery short stories