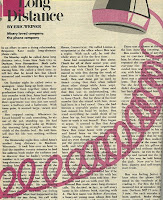 First Sentence:  "In an effort to save a dying relationship, Benjamin Katz made long-distance phone calls."

Last Sentence:  "That seemed an exceedingly small price to pay"

Author:  The short author blurb states that this is the author's first published short story.  Research shows there are two famous authors of this name, a children's book writer and an NPR travelogue writer.  I can't find a bio of either which states where these authors were born as my info here tells me this short story "Weiner" grew up in Providence, Rhode Island and in 1981 was living in NYC. Of course, it is more likely this is a completely different person, as the name is not all that unique.

This is a short short story taking up 3 columns of one magazine page and does not hold up well to time.  It is out-dated and I found it an annoying story.  Ben and a girl live together for four months and then she leaves him for her former long-term boyfriend whom she had never gotten over.  Ben then proceeds to call her long distance with no result, moves on to calling her mother, some friends (all long distance) and eventually goes through his entire address book starting with "A".  Retelling the story each time, it feels fresh and new to him; most people tell him to get over it and move on with his life but all seem willing to listen.  By the end, he calls the girl one more time planning to tell her the last thing that should make her come back to him and when she pauses to listen instead of hanging up like usual, he cannot think of anything to say.  Instead, he tells her off and says he wouldn't get back together with her even if she wanted.  Life goes on until he gets the phone bill, at which point he has an itemized list of his "phone therapy" and he feels the cost was well worth it.

I found Ben annoying, his fixation on a girl he really hardly even knew somewhat creepy and the phone angle out-of-date since most of us have some sort of free long distance plan these days.  Perhaps readable at its time but not worth revisiting today.
Labels: 1981 realistic fiction short stories