Short Story: "Daughters and Other Strangers" by Elizabeth C. Mooney 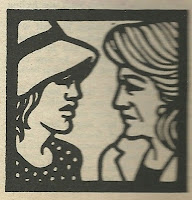 "Daughters and Other Strangers" by Elizabeth C. Mooney
a short story

First Sentence:  "The room seemed to be making a statement, a mute statement on behalf of Elsa, who was absent."

Last Sentence:  "Then in amicable silence they walked together up to the porch of the old farmhouse."

Author:  The little author blurb tells us Mooney is a freelance writer, a former, newspaper reporter and whose current non-fiction title is about surviving widowhood.  Further research shows she is commonly referred to as Elizabeth "Comstock" Mooney, wrote a Young Adult mystery and few other non-fiction titles.

I did not relate to this story at all.  I will give that it was well-written and I had no problem finishing it.  However, the story focuses around a 24 year-old woman whose job has failed and moves back in with her mom, as she stresses "temporarily".  Relations are strained, as Elsa clearly does not want to be there; she is used to the freedom of living on her own and rather than being thankful for having a place to turn to in her hour of need takes advantage of it by not showing up for meals and staying out late at night.  The mother herself has gotten used to living on her own; she also has a new found freedom but can't help but worry where her daughter is when she doesn't show up one night.  On a long drive, they have a slight heart-to-heart conversation that non-chalantly touches subjects of importance and yet they still continue to keep this distance between them that brings an air of understanding that their relationship will not be the same.

I just could not relate to this and didn't like either the mother or daughter.  I was 24 when my own mum died of colon cancer.  At this time in my life I was already a wife and mother myself.  My mum and I had grown very close over the past few years, talked on the phone, shopped and confided in each other like bff's.  I cannot imagine this sort of relationship with one's mother and wanted to warn the girl to take pleasure in the precious gift of her mother as she would not always be there for her.
Labels: 1981 short stories women's fiction