338. Santa Claus Around the World by Lisl Weil 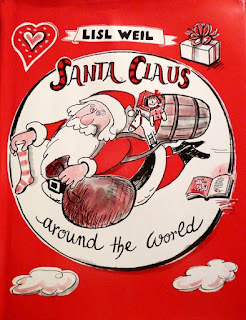 Santa Claus Around the World by Lisl Weil (US) - (Canada)

First sentence: "No matter what shape or name he goes by, Santa Claus has been a beloved visitor and gift-bringer at Christmastime for as long as anyone can remember."

Publisher's Summary: "Santa Claus is beloved by children all over the world. Whether he arrives by ship in The Netherlands on December 6 or by sleigh in America on Christmas Eve, he comes bearing gifts.

Here are many of the older and newer ways of remembering him.  In some countries his called Niklaus after Nicholas, a kind and caring bishop of the fourth century.  In England and France, he is known as Father Christmas, and in Italy, the Italians welcome a female gift-bringer named Befana.

Although each country has its own stories and ways of celebrating Santa's arrival, he is joyously welcomed into the hearts of young and old people everywhere."


Acquired: Purchased a used copy from the library sale table

Reason for Reading:  Lisl Weil is a favourite children's illustrator and I picked this one up this summer intending to read it for Christmas this year.

Just from the cover you can tell what kind of wonderful illustrations this non-fiction picture book is filled to the brim with.  Lisl Weil has always been one of my favourite illustrators and I didn't think twice about adding this to bag when I saw it on the library sale table.  I've looked at this book several times since I've owned it just to enjoy these illustrations but now that Christmas is almost here I sat down last night to read the charming text.  This book's topic is two-fold.  First the history and cultural differences of Santa Clause throughout the world and secondly it broaches the subject of someone who says there is no Santa Claus and it's just a man in a suit.  Here the author uses a wonderful explanation of "Santa's helper's" which can either explain away why the "real" Santa can't be everywhere or why we need "Santa's helper's" and how we can be one not just at Christmas but all year long.  The history and traditions presented are very interesting and of special note to me was the mention of "Krampus", whom I had read about earlier this month in a horror novel.  Oddly enough several countries have a folk tale of a similar character.  An entertaining book, though sadly out of print.