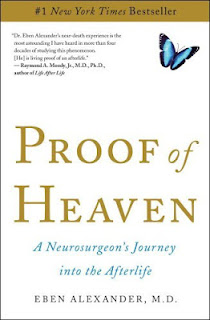 Proof of Heaven: A Neurosurgeon's Journey into the Afterlife by Eben Alexander, M.D. (US) - (Canada) - (Kindle)

First sentence:  "When I was a kid, I would often dream of flying."

Publisher's Summary: "A SCIENTIST’S CASE FOR THE AFTERLIFE

Thousands of people have had near-death experiences, but scientists have argued that they are impossible. Dr. Eben Alexander was one of those scientists. A highly trained neurosurgeon, Alexander knew that NDEs feel real, but are simply fantasies produced by brains under extreme stress.

Then, Dr. Alexander’s own brain was attacked by a rare illness. The part of the brain that controls thought and emotion—and in essence makes us human—shut down completely. For seven days he lay in a coma. Then, as his doctors considered stopping treatment, Alexander’s eyes popped open. He had come back.

Alexander’s recovery is a medical miracle. But the real miracle of his story lies elsewhere. While his body lay in coma, Alexander journeyed beyond this world and encountered an angelic being who guided him into the deepest realms of super-physical existence. There he met, and spoke with, the Divine source of the universe itself.

Alexander’s story is not a fantasy. Before he underwent his journey, he could not reconcile his knowledge of neuroscience with any belief in heaven, God, or the soul. Today Alexander is a doctor who believes that true health can be achieved only when we realize that God and the soul are real and that death is not the end of personal existence but only a transition.

This story would be remarkable no matter who it happened to. That it happened to Dr. Alexander makes it revolutionary. No scientist or person of faith will be able to ignore it. Reading it will change your life."


Acquired:  Received an unsolicited copy for review from the publisher.

Reason for Reading:  My friends had been talking about the book about the little boy who went to Heaven and everyone was mentioning that there was a new one out about a doctor who had had the same experience.  That was the one I was interested in reading, so I was thrilled when I received a copy to review out of the blue!

I'll refer to the author as Eben as that is what he is most referred to by others in the book.  I thoroughly enjoyed this book; it is the first modern-day account of Heaven that I have read.  I found it fascinating.  Of course, his descriptions of what Heaven is like makes profound reading for a believer, but it is also the complete tale of his story that is awe-inducing.

Eben writes the details of his medical condition that caused him to be virtually brain-dead and in a coma for seven days in a voice that makes all the medical intricacies understandable to the lay person.  This is very important for the reader to realize just how unrealistic his recovery was in this situation.  The fact that Eben is a neurosurgeon also means that the book is filled with exceptional details, again written as to be understandable to the lay person, on how the brain works and just what scientists and the mainstream medical community believe about the brain and the scientific incompatibility of believing in a soul when one puts their faith in scientific knowledge.  It is amazing how non-believer scientist Eben, flooded with the realities of God is able to come to terms with faith and science and explain how they go hand in hand.  A must read as the publishers promote for both scientists and believers.  The only problem I had with the book was one particular chapter where the author strays from presenting the facts and theorizes about religion and I found his theology way off but he is entitled to his musings and conclusions, no points off my review for that!  Very interesting and uplifting, especially in the fact that it presents how science and religion *do* work side by side when your faith is in the Creator.
Labels: 2012 christian non-fiction