327. Hill of Beans: Coming of Age in the Last Days of the Old South by John Snyder 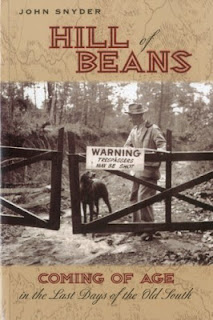 Hill of Beans: Coming of Age in the Last Days of the Old South by John Snyder (US) - (Canada) - (Kindle)

First sentence: "The sun will soon be down."

Publisher's Summary: "This memoir of growing up in the Old South during the Depression evokes a time gone by. And while it is a loving memoir, it is populated by real people dealing with hard times, sometimes with cruelty, sometimes with violence–including a mysterious case of arson that forever changed John Snyder’s life.


Hill of Beans has been compared by publishing professionals to the seminal writers like William Faulkner, Flannery O’Connor and even Laura Ingalls Wilder.  The early comments of John Snyder’s remarkable, poignant account of growing up in Depression era South Carolina are in and they are glowing"
Acquired: Received a review copy from the author.

Reason for Reading:  I really enjoy this type of memoir.  The story of ordinary people who lived ordinary-to-them lives, yet with the passing of time their story has become a history of a forgotten way of life.  I particularly like memoirs set between the wars and set in the Southern US.

An extremely charming and readable memoir which covers the author's life from his earliest remembrances until he leaves home for college at age 17.  The book is divided into three main parts which defined his life: The Mountains, The Town, The Farm.  These are the places he lived in South Carolina starting off fairly well-to-do for mountain folks, his father was a surveyor/architect and ending up just on the good side of struggling to get by as they worked a farm without any machinery almost up until the author left home for higher education.  Each part is simply written in vignettes with subheadings, each telling a small independent story, some are interrelated, others are one-offs but over all they have an over arching theme as they tell the story of the author's family's life from the 1930s to the 1950s and his heritage is told through stories related by the older members of the family.  This is an easy book to read and one that can easily be put down and picked up again as the "vignettes" are short.  However, this does make the book a slow read as one never picks up on a thread, there is no cohesive linear story.  Even though the story is told chronologically, there are points when this is abandoned as a tale creeps in out of order.

A fascinating read!  The story of a time when children worked in the home, in the fields, went out hunting and gathered food (berries, apples) when out playing.  A time when machines were being introduced to take the load off man's work but not everyone could afford to jump on the band wagon.  A time when most people still had outdoor toilet facilities.  This is also the last days of the old south where racism ran rampant, was a way of life for most folks and the author doesn't sugar-coat any of his family's prejudiced language and ideologies of the times.  Not everything is to be admired from the "good ol' days" but when the wheat has been separated from the chaff we are left with a nostalgic feeling for times that may have been harder on the body and labour intensive, yet were simpler in what was important: family, morals, honour, the value of hard work.  Snyder writes well and has an enjoyable narrative voice.  A good read!
Labels: 2011 history memoirs non-fiction