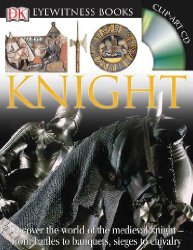 First sentence: "In the fourth century CE, the Roman Empire and Europe were invaded by various barbarian tribes."

Publisher's Summary: " Here is a spectacular and informative guide to the life and times of the medieval knight and his followers. Superb color photographs of everything from suits of armor to the lord and lady of the manor in full costume offer a unique "eyewitness" view into the lives of medieval people at peace and during wartime. See a horse's armor, medieval siege engines, how armor is made, how a castle is attacked and defended, how a knight put on his armor and the weapons of a Japanese samurai. Learn the rules of jousts and tournaments, the language of heraldry, how the sections of a suit of armor were joined together, how a falconer trained his hawk and why the Crusades were important. Discover who treated the wounded on a medieval battlefield, how knights hunted for deer, the way the first guns worked and how a knight recruited his followers, and much, much more!"

Reason for Reading: Ds loves the Eyewitness Books and I bought this one for him as a reward for something he accomplished.  We took a break from our regular history read aloud and I read a two-page spread from this to him every "school" day.

Ds loved the book!  What is there *not* to love about an Eyewitness Book?!  The pictures and photography are excellent; these just make for wonderful coffee table books for any ages.  Ds likes swords (he has a life-size toy collection) and weaponry (before guns) and I think this inspires his interest in Knights.  He sits riveted beside me while I read the text and makes sure I read every caption to every picture.  He learned a lot from this book and he brought to the table his own knowledge which was expanded upon.  A definite 5* rating from him.  I also thought the book was well done.  Since the information was all mostly pre-1550, the inescapable Christian content that accompanies this topic was for the majority unbiased and presented simply as it was in the day. For example the Crusades are given straightforwardly from the knights point of view without any modern relativism.  The bias came in when discussing specifically Catholic issues, which of course, every Christian was, pre-Reformation.  Some statements on the Knights Templar were simply untrue. For example the king of France's vendetta against them wasn't mentioned at all and there were other remarks, that as a Catholic, I had to stop and say this is not exactly true and explain the whole story.  I take a mark off and give a rating of 4 because of this.  However I do expect this, as I don't expect a mainstream publisher to present Catholic history without a bias.  I also am irritated with the use of CE instead of AD, and usually just chuck books by publishers who use it as it is the first sign that historical revisionism will be in place, but as noted above I respect DK Publishing and find they publish Christian information and material quite well for the most part.

Ds is currently perusing the titles trying to pick which Eyewitness Book he'd like next.
Labels: 1993 catholic history MG non-fiction