319. Scott Pilgrim vs. the Universe by Bryan Lee O'Malley 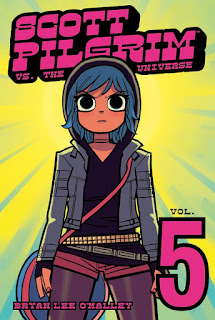 Publisher's Summary:  "Scott Pilgrim is at the top of his game: he just turned 24, he moved in with the girl of his dreams, and he defeated at least half of The League of Ramona's Evil Exes. But life at the top is treacherous and if things can't possibly get any better for Scott, it means they can only get infinitely worse! Scott's band is in total turmoil, his own exes have all boarded the train to crazy town, and Ramona's evil exes have started appearing in pairs! And what's up with Ramona, anyway? She's been acting kinda weird ever since she and Scott moved in together. It's the second-to-last volume of the Scott Pilgrim series and it looks like Scott's precious little life has come back around to bite him in the butt!"

This was the worst book in the series for me.  It's Scott's 24th birthday and he has matured a bit like I wanted him to over the course of these books.  At least he's no longer using girls and being a major jerk, though he is still a jerk.  Ramona's behaviour is suddenly all out of character and she appears to just disappear.  o..kay?... Anyone doing the math is not surprised to know that this book's boyfriend will have to be twins, otherwise how do we get 7 evil boyfriends out of 6 books; as any videogamer knows the last one is going to be reserved for the Boss.  So no surprise there.  The battle scene was very low key and seemed as if the author had actually gotten tired of the whole evil boyfriend plot himself!  While fighting, this Japanese duo seemed to have much more fun dishing the dirt on Ramona to Scott than actually winning the fight.  Not all characters appear in this volume and some only make cameo appearances; the book highly concentrates on Scott, Ramona and Kim.  Scott has a rendezvous with Gideon, the last evil boyfriend, the Boss, the one behind all this madness, who has all the answers; by the volume's end.  This sets up the final book but doesn't leave me excited in anyway.  Though I've lost my get-go for this series, with only one more book to go till journey's end I will be reading the final volume soon.
Labels: 2009 Canadian author fantasy magical realism manga