317. Laura Secord: A Story of Courage by Janet Lunn 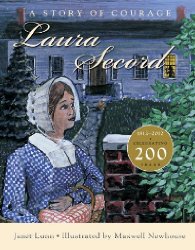 Laura Secord: A Story of Courage by Janet Lunn. Illustrated by Maxwell Newhouse. (Canada) - (US)


First sentence: "Laura Secord did not think of herself as a brave woman."

Publisher's Summary: "The war between Great Britain and the United States was a bitter one. For two years, from the summer of 1812 to the winter of 1814, fierce and bloody battles were fought.

Laura Secord never thought of herself as brave. She was gentle, shy, and soft-spoken. But she was brave. When American officers took over her home, demanding food, she heard them boasting about a plan that would give them an easy victory over the British troops. Laura's husband, James, would have gladly warned the British, but he had been badly injured. It fell to Laura to make the gruelling trip."

Reason for Reading:  Janet Lunn is one of the best children's Canadian history/historical fiction writers and I always enjoy her work.  I also have had an interest in Laura Secord since I was a child which has only grown since we now live in her stomping grounds and visit her house-turned-museum once a year.

A short book that nonetheless is very well-written and detailed concerning Laura's famed trek to warn the British troops of the planned American attack.  Though the entire book focuses on this pivotal event in Secord's life it also manages, at the beginning more fully and throughout in snippets, to show what Laura was like as a person, what her life was like as a pioneer and who she was besides the hero we know her as today.

The publishers recommended age is 8-12.  Picture books with an historical theme seem to always get this age group, however this is not a typical picture book.  It is text heavy, even though each two page spread is one page text, one page illustration.  My recommendation would be for ages 10+.  The illustrations are gorgeous!  I do not like the cover illustration though; it is the only one in the book I do not like.  The artist's folk art style makes for wonderful paintings as he does landscapes and long-shots of groups of people where they are painted more as outlines without any distinct features.  His style is not particularly suited to close-ups of people but otherwise it is rich and folksy being a great accompaniment to the text.  A lovely book, with a good dose of information for an introduction to Laura Secord or a quick overview of her life.