314. Krampus the Yule Lord by Brom 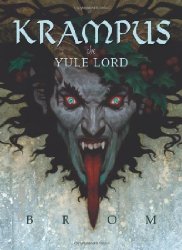 Publisher's Summary: "One Christmas Eve in a small hollow in Boone County, West Virginia, struggling songwriter Jesse Walker witnesses a strange spectacle: seven devilish figures chasing a man in a red suit toward a sleigh and eight reindeer. When the reindeer leap skyward, taking the sleigh, devil men, and Santa into the clouds, screams follow. Moments later, a large sack plummets back to earth, a magical sack that thrusts the down-on-his-luck singer into the clutches of the terrifying Yule Lord, Krampus. But the lines between good and evil become blurred as Jesse's new master reveals many dark secrets about the cherry-cheeked Santa Claus, including how half a millennium ago the jolly old saint imprisoned Krampus and usurped his magic.

Now Santa's time is running short, for the Yule Lord is determined to have his retribution and reclaim Yuletide. If Jesse can survive this ancient feud, he might have the chance to redeem himself in his family's eyes, to save his own broken dreams, . . . and to help bring the magic of Yule to the impoverished folk of Boone County."

Reason for Reading:  I loved "The Child Thief", a horror re-telling of the Peter Pan story and was anxiously awaiting reading the author's next book.  I was quite excited to find this has a Christmas theme.

Based on Viking mythology the book brings back the gods and backstory of that culture including Baldr and mythical beasts; with this he mixes the history and tradition of Santa Clause to create a pagan god vs modern fairy tale.  Krampus is the real traditional Lord of Yuletide centuries before the arrival of Santa on the scene and he has come back to claim what belongs to him.  These two are pitted against one another and the reader does not know which of them  is bad or good.  They both seem to have both qualities and while the story is told from an insider's view of Krampus' side we get a biased opinion of him and while we may not have wanted to at the beginning, it is easier to feel for him, rather than the strong Viking-like Santa who is out to destroy Krampus.

I had a hard time getting into this book.  I enjoy Viking mythology and that is what kept me reading otherwise I may  not have made it past the first half of the book as I found it underwhelming and tedious to read.  I would not call this story horror.  Sure there is some violence, but Krampus keeps insisting he is not a devil and while there is some paranormal activity there are none of the classic horror elements to be found and it certainly wasn't scary in the least.  I mentioned halfway through the book, this is where things picked up for me.  The action picked up, the characters had become more fleshed out and we were delved further into the Viking mythos.  It took me several days to read the first half and only two sittings to finish the second half.  This book is nowhere near as good as "The Child Thief" which is a masterpiece of writing and illustration.  The illustrations here show off Brom's talent but since each is of a devil of some sort, they become similar after a while and did not stimulate me like the gorgeous art in his previous book.
Labels: 2012 Christmas horror magical realism myths