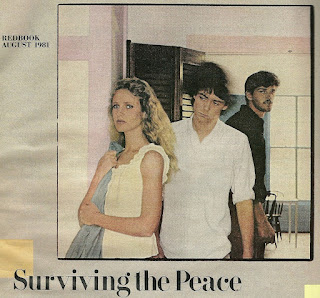 "Surviving the Peace" by Margaret Ellingson
a short story


First Sentence:  The moon is rising in redwood country on a warm September night.

Last Sentence:  "Her mind drifts back toward dreams, and just before giving in to the darkness she sees soft browns and greens, plashes of pink, purple, red, and is filled with an overwhelming sense of peace as she imagines the doe, safe again up on the starlit ridge, asleep under the trees, her belly full of flowers.

Author:  The tiny author blurb tells us that the author is an English teacher and that this is her first published short story.  I can find no other works by this author online, which is a shame as I really enjoyed this one.

The picture and the brief accompanying summary blurb lead the read to believe this will be a piece of romantic (possible college-age) fluff.  It is far from that.  This is the story of a relationship between a man and woman who eventually become married.  What makes them different from the rest is that the man has just finished a Tour of Duty in Vietnam and come home early as he was nearly killed, but saved by his buddy.  The woman led the stressful life of the one left behind and then the devoted girlfriend nursing him back to health.  Michael heals and they marry, but he can't talk about the war, ever, at all.  His emotional wounds are there, he's dealing with it fairly well but his wife is not the one he wants to share it with.  Other than this their new life together is happy.  Then Michael's war buddy, the one who saved his life, shows up about a year later.  Alex hasn't handled the move back to civilization well.  He's obviously suffering from we would now call PTSD.

Alex stays with the couple for a few weeks while he gets himself settled and the three of them have fun and get to know each other but Mike and Alex start talking about the war in a way Susan cannot join in.  She leaves them to it, realizing it is cathartic for them.  Three months go by, Alex is still living with them.  He has turned into a slob who never picks up after himself, sits around and watches TV all day and goes out with Mike to veteran anti-war meetings/demonstrations.  They are often late for dinner, Susan hardly sees her husband any more.  Alex and her never speak to each other.  Things are very tense until Susan cannot take it and is packing to leave one evening when they are once again late for dinner.  They arrive in the middle of this scene.  It is only then Mike and Susan finally have a heart to heart that could really only have been spoken in this moment of dire consequences.  There love stands the test.  They stay together and Alex moves along with his life.

A year goes by with Mike visiting his friend out in the boonies in a cabin he has built for himself.  Susan never comes.  Alex is only slowly getting himself back together but it takes this time away from it all for both Susan and Alex to realize the importance the other has in the life of Mike and how with give and take on each one's side the three can all be close friends to each other and live their own lives at the same time.  A really wonderful story.  My only problem with it was I found the dialogue a little stilted and unnatural but for a first publication, that can be taken into account.
Labels: 1981 magazine short stories vietnam women's fiction