Short Story: Love in the Meadow by Helen Jean Burn 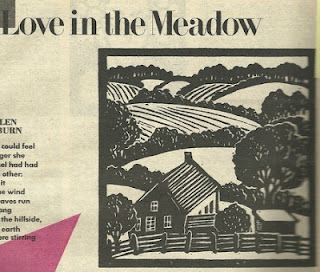 "Love in the Meadow" by Helen Jean Burn; Illustrated by Bascove
a short story


First Sentence:  "That morning, the one Hetty Roop kept trying to put out of her mind, she had awakened to the pierce of silence."

Last Sentence: ""What we got to do now," she said, "is get another rooster and some more cement.""

Author: The author blurb only tells us that Burn lives in Maryland and is currently at work on a novel tentatively called "The Briar Patch".  Never having heard of her, some research tells that she did write a novel entitled "Savannah" and a couple of non-fiction books but otherwise has spent most of her life involved in Maryland Public Television, specializing in historical documentaries.  She did write many short stories published in various magazines.

This is a beautiful, simple story of life and death.  In it a 70 year old woman contemplates these as she tends to a situation and remembers her past.  It all starts with a fox invading her hen house and taking off with the rooster leaving only some feathers and a claw behind.  She remembers past incidents of being told what a menace foxes are to farmers and sets about fixing the damage to the hen house and starting off to town.  Now through her memories we learn she is on her own, her husband has died and in a round about way we learn that Sonny, obviously her son, was killed in the war (Vietnam?).  She and her husband had a burning passion for each other which took hold of them anywhere during their early years together and in the later years was infrequent but not gone by any chance.  Her husband is alive in her memory.  She goes to town and we learn her mission is to buy a trap.  Must kill the fox before it takes out her whole livelihood.  The viciousness of the steel jaw trap seems out of place for the woman we have got to know up to this point that it is remarkable that she goes through with the enterprise and finds a fox in the morning who has been gnawing on his own foot.  The woman contemplates life and death again, examining what her reasons are for killing this fox; the bitter taking of a life for a life.  It does not set well with her in the end and she shows the compassion that is the real natural part of her character in the end.  A lovely story.

I must also note, the first thing I noticed when I turned to this story was the illustrations, 4 in total, by Bascove.  She is one of my favourite contemporary Canadian artists and I'm thrilled to have these pictures.  I am trying to collect all the Robertson Davies covers she illustrated.