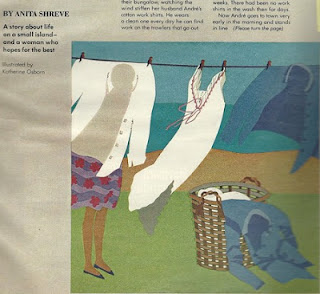 First Sentence:  "All along the road to Marguaree, the women have there wash out."

Author:  Anita Shreve is a very popular author today.  Though I've only read one of her books, I did enjoy it immensely.  The little author blurb after this story tells us she won the O. Henry Award for a short story in 1976.  A little research shows that her first novel wasn't published until 1989, meaning this story here was published while she was still relatively unknown.

This is a short short story, being two magazine pages in length.  Beautifully writtten and a joy read, it is not a happy story, nor really sad but more what I would call melancholy.  A Nova Scotia woman is sitting on her step in September watching her laundry dry on the line, thinking of her husband.  He's a fisherman but out of work since he lost his boat in a storm some months back.  Now he trips down to the waterfront every morning in a fresh shirt looking for work on a boat.  If he doesn't come home Libby knows he'll be home that evening with crabs for dinner and a smile on his face.  But more often he comes home shortly after, takes off the shirt, hangs it back up and goes back to bed.

She has three of his shirts on the line this week, meaning he had some work.  There is one shirt though at the end of the line she will not look at, it's his "best" shirt and she knows what that means.  He wore it one night, talked of seeing the guys, could be a job in it, would be home at such o'clock.  Libby new better though.  She knows what the other husbands do when they wear those shirts and go to the bar and talk to the women there.  Sure enough he comes home past midnight, apologetic.  Does she smell perfume mixed with his sweat on his shirt?  The next morning the shirt is put in the bottom of the laundry bin.  On washing day she doesn't just put it in the wash, she scrubs it with bleach first.  Sitting here on the step she thinks about how she's going to tell her husband about the new-spring baby.  She'll wait for the next day when he goes to town and doesn't come home till later, carrying dinner crabs with him, he'll be smiling then.  Taking the laundry off the line she gets up the nerve and grabs his white shirt and inhales, no perfume, just pungeant bleach and salty sea air emminate from it now.  She smiles and takes her silk nightgown into the house.  One's left to not really know how to feel for Libby, she is happy in her own self and yet she's surrounded by melancholy.  Beautifully written, though.