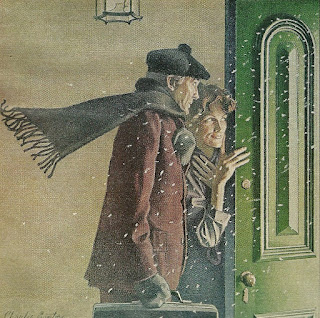 First Sentence:  "Early in October, Mr. and Mrs. Trampbush invited us to their house for dinner."

Last Sentence:  "Finally, when he was satisfied, he turned to me for my approval, and finding it, he declared himself ready for winter."

Author: The little author blurb at the end of the story tells us that Marjorie Franco has been contributing a yearly August short story to this magazine featuring "Alexander and Genevieve" since 1976 and that she is currently writing a novel about them.  Not much information can be found online about her but it appears she did write the novel "Alexander and Genevieve" which while not popular on the internet can be found for a reasonable price.  She also appears to have written two YA novels, again not popular with collectors/readers but can be found.

This was an adorable story and I would pick up other copies of this magazine from the time period just to read more stories of this couple.  A feisty pair, this married duo are quaint and yet can get into a battle of the wits reminding me of a Tracy/Hepburn couple.  This whole episode is of stubbornness, the love they have for each other and the coat as a symbol of their problem.  Alexander is up for a promotion, which he hasn't told Genevieve about because it would involve moving from their Midwestern climate to Arizona.  G. ends up having a heated discussion with A.'s boss at dinner one night about how much she loves winter to his utter astonishment and A. feels that G. has compromised his career from being so adamant on the topic.  It isn't until well into the story that he confesses the whole story to her, but in the meantime he becomes moody and refuses to buy a winter coat as it symbolizes to him that he will not get the job offer meaning he has accepted defeat.  A's opinion is that his boss may not offer him the job now that he knows how G. feels about the climate or that he will be offered the job and will decline because of his love for G. and respect for her happiness.  This causes a rift in their marriage, some confusion until the reason is let out of the bag, guilt once G. knows the truth and some funny scenes and witty repartee as A. continuously ventures out into the quickly dropping temperatures without a winter coat.  The final outcome is heart-warming, showing how all persons involved have respect for the others.  Alexander and Genevieve are a couple whom witty repartee comes naturally, but whose love is evident and I highly enjoyed reading this simple story about them.
Labels: 1981 short stories women's fiction