"Abe, Between Rounds" by Ethan Canin
a short story 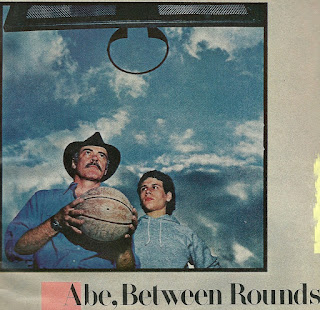 First Sentence:  "What's the one thing you should never do?"

Last Sentence:  "And then he forced his mouth up to his father's ear and said, "You win, Pa.""

Author:  The little author blurb tells us that Canin is a university student, and that this is the first of his short stories to appear in a "national magazine.  Further online research shows he became a doctor, continued to publish short stories and eventually became a full-time writer.  He is now the author of several novels and two collections of short stories, in which this story does not seem to appear.  I would look forward to reading the author again.

This is a father/son story and perhaps a Jewish story.  The family is Jewish but is not practicing, though cultural references are made.  The father is the patriarch of the family and teaches his son to live a life of moral and ethic high ground.  The son worships the father but they are not close in an emotional or physical way.  Our story begins with the son, Myron, telling us the story of when he told his father he was quitting med school and then reminiscing about his childhood and the eventual resolution of his wanting to quit.  Brilliantly crafted with writing that is a pleasure to read, I was wrapped up in this story and felt for both Myron and his father Abe.  The boy adores his father and yet through all Abe's blustering and machismo, Myron sees through it and realises that his dad is just a man, a human being after all.  This realisation came to him first the summer his father decided out of the blue that Myron would spend his summer holiday at Jewish camp; it's already been planned and paid for.  For a non-practicing family this seemed odd to Myron beside the point he didn't want to waste his summer on learning religion.  His father says: so you're a man now let's solve this like men.  A race!  If I win you go, if you win you stay.  Myron is reluctant but during the race hearing his father's determination, his struggling breath, he makes his significant realization and ends up going to camp.

Later on at med school, the elderly patients bother him.  He sees them as having one foot in the grave so to speak.  They have a certain smell, a certain look, their skin a certain colour and he equates them with his father.  His father is an old man and must be like these patients, waiting for death, waiting for the end.  In a rather fervid climax it takes a bit of violence for Myron to experience his father's heartbeat and realize the man is alive.  He may be old but he is alive!  This changes Myron's outlook on life and death.  Therefore, continuing his medical studies.  An engaging story!
Labels: 1981 realistic fiction short stories