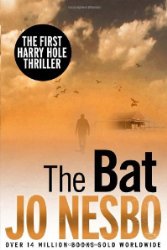 
First sentence: "Something was wrong."

Publisher's Summary:  "Before Harry took on the neo-Nazi gangs of Oslo, before he met Rakel, before The Snowman tried to take everything he held dear, he went to Australia. Harry Hole is sent to Sydney to investigate the murder of Inger Holter, a young Norwegian girl, who was working in a bar. Initially sidelined as an outsider, Harry becomes central to the Australian police investigation when they start to notice a number of unsolved rape and murder cases around the country. The victims were usually young blondes. Inger had a number of admirers, each with his own share of secrets, but there is no obvious suspect, and the pattern of the other crimes seems impossible to crack. Then a circus performer is brutally murdered followed by yet another young woman. Harry is in a race against time to stop highly intelligent killer, who is bent on total destruction."

Reason for Reading:  I've been waiting ages for them to finally publish the first book in this series in English!

Harry Hole's time in Australia is continually referred to throughout the series and it has been frustrating as an English reader to not have the first book in this series available to read.  Now that it is finally here and I've read it, I really wish it had been there to start with as it really does fill in some blanks and add insight to Hole's character that have been missing to the reader who has not experienced this first glimpse of Harry.  I'll admit it was a little weird going back to this new, fresh Harry.  At first I was in wonderment as I kept thinking, "wow, this is not the Harry of the later books at all."  The guy was actually happy and eager for the first part of the book!  There was a secret in him though and it was eventually revealed and we finally find out the story of what really happens to him in Australia that adds to his burden of grief and guilt that he carries with him for the rest of his life.

The mystery itself was superb.  I was thrilled to not have figured out the killer in this one and we are given plenty of suspects.  The murders are slightly gruesome with a couple of doozies added in for the chilling effect.  At a certain point the story takes a turn to the dark and Harry Hole readers will eventually find themselves in familiar territory.  As with all Nesbo books, once I started it was hard to put the book down and I can understand how this one won an award and set Nesbo's career as a writer on full speed.  The story does take place 100% in Australia so it doesn't have the Scandinavian allure that the others have and Harry is like a fish out of water in this setting for readers who know the character well but it's something a little different for us also and fantastic to see this character's beginnings.  New readers of Nesbo should certainly start here for full enjoyment of the character development.  Book 2 will be published soon and then finally, English readers will be able to read the series in order.  Great first book!