303. Master of Deceit: J. Edgar Hoover and America in the Age of Lies by Marc Aronson 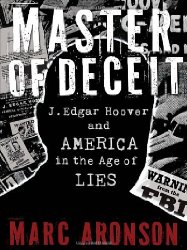 Master of Deceit: J. Edgar Hoover and America in the Age of Lies by Marc Aronson - (US)- (Canada) - (Kindle)


First Sentence: "Today, Americans face intense terrorist threats and thus hard choices: Which rights and freedoms can we, must we, curtail in order t be safer in our streets and homes?"

Publisher's Summary:  "King, there is only one thing left for you to do. You know what it is. . . . You better take it before your filthy, abnormal, fraudulent self is bared to the nation."

Dr. Martin Luther King received this demand in an anonymous letter in 1964. He believed that the letter was telling him to commit suicide. Who wrote this anonymous letter? The FBI. And the man behind it all was J. Edgar Hoover, the FBI’s first director. In this unsparing exploration of one of the most powerful Americans of the twentieth century, accomplished historian Marc Aronson unmasks the man behind the Bureau
-- his tangled family history and personal relationships; his own need for secrecy, deceit, and control; and the broad trends in American society that shaped his world. Hoover may have given America the security it wanted, but the secrets he knew gave him -- and the Bureau -- all the power he wanted. Using photographs, cartoons, movie posters, and FBI transcripts, Master of Deceit gives readers the necessary evidence to make their own conclusions. Here is a book about the twentieth century that blazes with questions and insights about our choices in the twenty-first."


Acquired:  Received a review copy from the publisher, Candlewick Press.

Reason for Reading:  I know all about this history but I love the time period and was interested in how it would be rendered in a young adult book and whether it would show any bias, either way.

This is a book about very bad people. First, communists, a political group of mass murderers who have killed more of their own people than any single tyrant has killed in wars or holocausts in the entire history of the world.  Second, a fanatic, a man who was an absolute fanatic and was given power, so much of it he became the most powerful man in America, in some decades even more so than the president.  J. Edgar Hoover, Director of the FBI was the fanatic and the Russian government were the Communists.

Aronson must be congratulated on presenting both sides of this coin as fairly as has ever been done in my reading.  What writer can prove each side to be right without showing his own bias?  Aronson almost gets away with it.  He explains why the anti-communist, fanatical, black & white Hoover thought and did the things he did and said and you'll make you get mad.  He explains the communist position on anti-capitalism and why it was attractive to working Americans and who could blame them and he'll make you get mad.  Both opinions are expressed with such clarity on issue after issue throughout the entire book, but each time it is counteracted with the opposing view and Aronson leads a small trail of truth through the swampy history of lies. Aronson almost gets away with not being biased but he very early on lets the cat out of the bag that he, himself is coming from the "Left".  In the opening paragraph he states "Communism and anti-Communism are just terms that appear on tests, like the Whig, Greenback, or Know-Nothing parties."  Excuse me????  Has the author heard of China??? Cuba, North Korea, Vietnam??  The poor souls of these countries are fighting communism every day of their lives and being arrested, tortured and killed for anti-communist activities.

Further on Aronson makes a blooper when he states "For years after the September 11, 2001, attacks, Fox News ran alert levels on its TV crawlers, reminding everyone to be scared, to be afraid."  I turned to the "Notes" section for clarification on this but nothing was mentioned.  I sure don't ever remember Fox News crawlers with the words "Be Scared.  Be Afraid."  Somebody doesn't like Fox News methinks.

Anyway onto the book, which the author has stated in his notes at the end he has written for highschoolers.  Great insight into this time period of our history.  Into the terrible evils of Communism and what it does to people, their freedoms and abilities to simply lead basic normal lives.  It also brings out the life of J. Edgar Hoover, the fanatic.  A man who had a sense of right and wrong but for whatever reasons he became fanatical about them.  While some of the things he believed in were good and decent such as democracy, capitalism, taking care in one's appearance he took them to such heights he became a dictator in his own little world.  He also became a tyrant and his sense of right and wrong became skewed and turned into racism and discrimination.  Unfortunately, he had power, he had "the goods" (illegally obtained) on the right people and that kept him where he was and there he stayed until he died peacefully in his sleep after 40 years on the job.  Aronson is able to bring this side of Hoover to light while at the same time dispelling all the ludicrous myths that have perpetuated about him especially to the modern day, where most people believe them to be true.  Hoover was not gay, he did not dress in women's clothing, he did not have a life long male partner as a "lover".  The man probably never had sex in his life and this puts him in all sorts of situations that can be crassly misinterpreted to make him seem to be the one thing he was not.  Aronson does explore the other rumour that Hoover may have had African-American blood in his family heritage and while not provable unless direct desendents step up to settle the issue once and for all, the author does make a case for it's possibility.

I enjoyed the book very much, read it over two sittings and found myself immersed in this frightening period of history.  Communism was something to fear and it still is today.  Freedom to live our lives as we see fit is one of our unalienable rights.  However we should never fear anything so much that we allow one person to fantatically control how the issue is handled.  Every group or person in power must be policed by others.  The only thing I didn't like about this book was Aronson's equating communism with civil rights with homosexuality with the women's movement.  Sometimes we just morally know what is right and what is wrong and it has nothing to do with fear.  I think I may have written an opinon piece on the topic instead of a review but at least I guess that means you can tell I enjoyed the book.  I wouldn't hesitate to recommend the book to adults who know nothing of the topic.