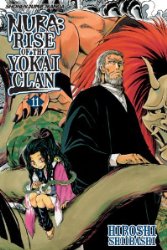 
First sentence: "Second heir... I thought... I was faithfully... following your words..."

Publisher's Summary:  "The Nura clan and their allies encounter a forest of torii gates on their way to find Hidemoto's lost seals. There, Rikuo and the others find themselves at the mercy of a yokai capable of using the thousand torii gates to form a massive, deadly labyrinth. Awashima falls prey to the labyrinth and is transported to another dimension, diminishing their numbers. Awashima will have to battle a mysterious and powerful yokai before attempting to escape."

The Nura clan finally reaches Kyoto and encounters many adversaries.  This volume is full of battle scenes and doesn't advance the plot all that much except to get them oriented in the right direction for their next plan of action.  Finding the lost seals seems to be the important goal to defeating Hagoromo-Gitsune.  The addition of Hidemoto, an heir from 400 years ago in the past is an exciting development.  I read the volume quickly as it was a lot of battles, which are not my favourite part of shounen.  I like the action, but they go on for way too many pages and I find them hard to follow.  So not the best volume, but the ending is intense and sets the scene for the next volume.