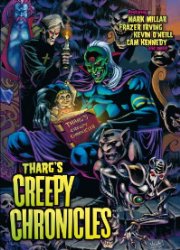 
First sentence: "My name is Tharg the Mighty, editor of the Galaxy's Greatest Comic, 2000 AD. "

Publisher's Summary: "From the deepest, darkest recesses of the Nerve Centre vaults, the eerie alien editor of 2000 AD known as the Mighty Tharg presents some of the creepiest, kookiest tales to terrify this Halloween.

Reason for Reading:  I just love 2000 AD!  I also love these "Tales of the Crypt" type of horror comics.

I will pretty much read anything published by 2000 AD, taking my interests into account.  Even when I take a chance I've never been disappointed.  However, this collection did not live up to my expectations.  The art was great and having read much from this publisher I am familiar with many of the authors collected here.  The stories just didn't thrill me though; they were ok.  Some were good, some were ok and a couple were whatever for me.  I guess I just wanted freakier, cooler, "fun-er" stories.  None of these wowed me.  Don't get me wrong, though, they were ok.  There was one set in the Judge Dredd universe and that was fun.  If you are a fan of the shorts in the comic then perhaps this will be great for you.  But I haven't read the comic in ages and just stick to the trade GNs.  This was my very first 2000 AD book that was less than stellar.