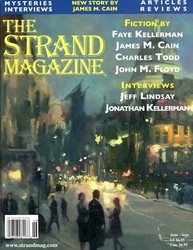 First sentence: "On the bar, in the space between the fat man's Tom Collins and the sailor's beer, a girl was dancing."

Publisher's Summary: "Mommy's a Barfly... An unpublished gem by the noir master, James M. Cain...the title says it all.

The Voiceless... Faye Kellerman pens a futuristic tale which will make you pause the next time you choose sending a text over having a face to face chat.

Wink at the Devil...The Charles Todd team pens another mysterious tale that takes us to the trenches of World War I.

The Adventure of The Memento More...Holmes and Watson chase some unlikely clues which makes for a very sharp twist at the end of this pastiche.

Blackjack Road...A game of cat and mouse involving a wheelchair bound man and a prison escapee.

Acquired: Purchased from a retail store.

Reason for Reading: I've always wanted to read this magazine and have been thinking of getting a subscription, so thought I'd try the current issue.

1. Mommy's a Barfly by James M. Cain. Illustration by Jeffrey B. McKeever. - This is a found story of the late Cain's which the editor (in his editorial) explains that as far as he can tell has never been published.  I wish an estimated date of its authorship was given but will have to just guess from the story itself.  I'm going to put it at just post WWII.  It involves a sailor but there doesn't seem to be a war going on, though the language is rough, 1940s-ish.  We have a woman entertaining her sailor husband in a bar.  He's on day leave and she's not taken him home.  Everyone in the bar knows she's cheating on him with some "weasel".  They have their little girl with them, she's about five and dances to the piano player's songs.  The bartender/owner and the piano player are talking about the woman's awful behaviour towards her husband, both of their neglect to the child, why is she up so late/in a bar?  Events escalate for the woman and end in tragedy.  The two men start to realize that perhaps she has reasons but then no matter, the child comes first.  Superbly written.  I've never read the author before and have put "The Postman Always Rings Twice" on my tbr. 5/5

2. The Voiceless by Faye Kellerman. Illustration by Michael Carroll. - Well, I didn't expect to find science fiction here!  I have never read this popular author.  Set in a future where everyone uses electronic devices to communicate with each other, emailing and texts.  The voice box had actually devolved into a useless organ like the appendix.  One day a little girl complains of an eye ailment and quickly afterwards goes blind.  Then her mother and father follow suit.  Next it is the neighbours, the whole floor she lives on, the apartment building and so on, until the virus has spread globally and blindness affects the entire population.  A blind population that is dependant on the written word for communication is quickly disabled and generations of blind scientists stumbled about slowly inventing robotic voice apps, until something surprising happens.  A fun cautionary tale.  4/5

3. Wink at the Devil by Charles Todd. Illustration by Colin Nitta - Charles Todd has been on my tbr list for some time now and I was excited in reading this Rutledge story.  Only it's not a mystery!  Hmm, so far two out of three stories in this mag are not mysteries.  And actually, the first is noire, but its not exactly a mystery either.  Anyway a wonderfully written story that tells the tale of warfare in the trenches of WWII. Rutledge ends up in a bunker with his injured buddy, two fellow privates and a German officer.  A will of wits between Rutledge and the German determines who and how many make it out alive.  Gripping.  5/5

4. The Adventure of the Memento Mori by Lyndsay Faye - A Sherlock Holmes pastiche!  Very well done!  This takes place right after the original story "The Empty House" and takes Holmes & Watson back to Croydon where they once had a grisly adventure.  I particularly enjoyed this because it involved one of my favourite Victorian topics.  Can't say more ... 5/5

5. Blackjack Road by John M. Floyd. Illustration by Jeffrey B. McKeever. - The longest story here and my favourite one.  I've never heard of this author before.  Again this is not a mystery at all, perhaps it would be called suspense but I'd more likely call it drama.  In the opening paragraphs we meet an elderly man in a wheelchair on his porch, comfortably viewing his property with a gun in his lap getting ready to kill himself as soon as the time is "right".  We are told the death of his wife a couple of years ago nearly did him in but now Christopher, age 24, is gone he has no reason for life.  We don't know who Christopher is, we know the man is "crippled" but not exactly in what way.  His life seems glum, yet we don't fully understand his musings.  Then as he sits there a dangerous stranger appears in front of him and the story begins to unfold.  I really enjoyed this, very well written, with good characterization of the old man. 5/5

The magazine continues with an interview of Jonathan Kellerman whom I've never read and haven't had any inclination to read and then one with Jeff Lindsay.  I read the first Dexter book and hated it, have never seen the TV show.  Then there is a section introducing all "The Strand Critics Award" Nominees and the magazine ends with book reviews.  I absolutely loved the reviews and all the book advertisements throughout the mag. I added a bunch of titles/authors to my tbr, reminded myself of ones I've been meaning to read and remembering what I have on the shelves.  The ads are as fun as the stories!  Loved the magazine and will pick up the next issue next time I'm at Chapters.  My rating is based on the stories alone.
Labels: 2012 magazine mystery short stories