288. The Gospel According to Mark


I do not review the Bible.  This is the format I've previously set upon to record my readings of the Books. 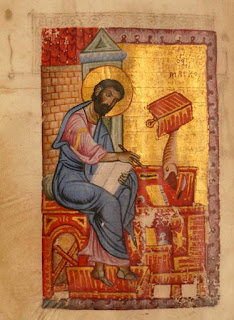 Book: The Gospel according to Mark

Written: Uncertain. Agreement is to before St. Peter's death.  Most likely between A.D. 50 and 67.*

Have I read before? Yes.  Many times.  Many translations.  Mark is the shortest Gospel and the (in my opinion) least detailed.  Mark's main focus is to tell us what Jesus actually did, rather than his teachings and speeches.  Beginning briefly with John the Baptist's preaching we are quickly introduced to Jesus at his baptism and most of the book then concentrates on Jesus's ministry, his healings, miracles, casting out demons; and his actions.  This is what Mark wants to impress upon us, Jesus' miracles.  Jesus is the Son of God!  One part we come across for the first time is a nice linear description from Jesus of the end times.  Of course this is discussed in Matthew, but here it is more straighforward and linear.  Mark is nothing, if not straightforward.  While the birth of Jesus is not mentioned, Mark does spend the last several chapters on the crucifixion, resurrection and ascension of the Lord.  He also gives details of some of the risen Lord's appearances.  Often Mark is suggested as the first Gospel for new Christian's to read because of its brevity. When we went to RCIA, we were told to read it at home over the duration of the course.

Reason for reading:  I am reading the New Testament to my 12yo ds this year.  He received this book at school last year and it is perfect for his comprehension level.  It does leave out some of the more controversial words, replacing them with more vague words (ie. "fornication" with "immoral acts") but my son is autistic, not understanding that part of life yet and this is our first time through with the actual Word of the Lord, rather than in bible story context though my son knows his Gospel well.  He was very astute in telling me when something was missing from Mark's account.  There is no boy in the fishes and loaves story, the prisoner being crucified with Jesus does not speak with him and ensure his place in Heaven.  He also asked some questions with which he was not satisfied with my answer so I promised to talk ask our Deacon for him.  So I discussed with the Deacon about Jesus being mentioned as having brothers, when we all know, Mary had no other children.  This is a hard concept for modern people to understand because of the loss of close family ties, but is more easily accepted in European, Latin and Black communities where relatives and friends are called "brother", "sister".  The actual word has no equal English translation to convey the same closeness, though the relation cousin is more appropriate to modern ears.  The other thing he questioned was rather deep about the end times.  Aren't all end times discussions deep?  Well, Deacon gave me some extra insight and ds and I discussed and came up with some ideas as to what we believe Jesus meant.

First line:  This is the Good News about Jesus Christ, the Son of God.

Last line:  The disciples went and preached everywhere, and the Lord worked with them and proved that their preaching was true by the miracles that were performed.

*Source for facts I needed to look up: The Catholic Encyclopedia
Labels: 0060 Bible catholic christian