284. The Three Robbers by Tomi Ungerer 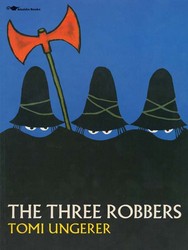 The Three Robbers by Tomi Ungerer (US) - (Canada)


First sentence: "Once upon a time there were three fierce robbers."

Publisher's Summary: "Tomi Ungerer has been making beautiful, anarchic and unique books for children for more than 40 years. He has been described by the "Guardian" as 'the direct natural descendant of the Brothers Grimm and Hans Christian Andersen' and, like all the best fairy tales, his classic story of "The Three Robbers" is by turns scary, charming and surprising.The book tells the story of three fierce black-clad robbers who terrorize the countryside, scaring everyone they meet. One robber stops carriage horses with his pepper spray, the second destroys the wheels of the carriage with his axe, and the third robs the passengers by holding them up with his blunderbuss. One day the robbers stop a carriage only to find a small orphan girl called Tiffany inside. On her way to live with a strange aunt, Tiffany is delighted to meet the robbers, who take her back to their cave instead of their usual haul of money, gold and jewels. The next day, Tiffany sees the treasures the robbers have amassed and asks what they plan to do with their riches.The men are baffled, as they had never thought about spending their money. So they decide to buy a castle and welcome all the lost, unhappy and abandoned children they can find. The robbers dress them in tall hats and long capes, just like the ones they wear themselves, only in red instead of black. Years later, when they are grown up, the children build a village near the castle, full of people wearing red hats and red capes. They also build three tall towers, in honour of the three robbers. "


Acquired:  I've had this for ages and can't remember but my copy is ex-library so there is a good chance I got it a library book sale.

Reason for Reading:  I love Tomi Ungerer as an illustrator; I love this book in particular and this qualifies as my "U" author for the A-Z challenge.


The publisher's summary certainly tells the story in probably as many words as are used in the book!  This is a simple tale and one with a rather ambiguous ending.  Not sure if I'm entirely comfortable with it.  The robbers who are indeed "fierce", with a gun, spend their lives as criminals.  A little girl captures their heart and they turn good, But is using all their stolen wealth to build a grand castle ethical just because they then house it full of orphans and are now nice instead of bad?  I somehow do enjoy the story, though.  What makes this a favourite for me and a keeper on my shelves is its illustrations.  The robbers are brilliant creepy little men in black capes and tall hats with only their eyes visible.  We never see any more of them than that.  The backgrounds are blue and black, keeping the story dark and probably intense for little children.  When the little girl is introduced she is surrounded with yellow.  A light in the darkness.  The orphans are dressed like the robbers only in red capes and hats adding joy and happiness and we see them outdoors against  green background.  Ungerer's drawings are a delight to behold and his use of colour in this book is dramatic.  A fun older book which is nice to see back in print.