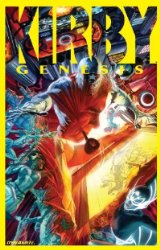 
First sentence: "In 1971, N.A.S.A was preparing the Pioneer 10 Space Probe for its mission for Jupiter and beyond."

Publisher's Summary: "The Kirby Event of the new millennium by the bestselling and award-winning creators of MARVELS! Superstars Kurt Busiek and Alex Ross bring Jack "King" Kirby's creations to life in a way you'll never forget!

The Pioneer 10 space probe carried a message to the stars. Now an answer's on the way - but not one we expected! When it arrives, the lives of three ordinary people - and the entire world - will be changed forever! This is the beginning. This is THE Genesis!

Absolutely fantastic!!  This comic packs a whole bang for your buck!  It includes the first 9 issues of this new series, which is in itself a complete story with a satisfying ending, though it leaves a thread hanging for the continuation of a new story arc.  The depth and breadth of the plot and characters here is so deep and wide that it is impossible for me go into details.  There are numerous superhero and villain teams working against other and they are all introduced rather quickly in the first few issues.  This does mean that it takes several issues to fully sort out who is who and exactly what is going on, but that is part of the whole fun of this book and the action and humour are so stimulating that one becomes more and more intrigued when in lesser hands than Busiek, this massive cast could have easily caused confusion.  But gradually, as the story progresses, the reader begins to separate out the various teams and certain pivotal characters.

While all this organized chaos is going on there are three main human characters to keep the story grounded.  First there are Jack Kirby and Bobbi Cortez, 17yos who have known each other since early childhood, and Bobbi's father retired police Sergeant Cortez.  Bobbi and Jack are the main heroes of the story and a mild romance is included for good measure.  The tile use of Genesis has a double entendre as the book explores beginnings; the beginnings of the world, its creation, nurture and growth; it's possible demise and a new beginning, a regrowth and a similarity to Biblical beginnings and meanings with a creator who guided humanity, a saviour who sacrifices his life for humanity's sake and ultimately a brief image in the heavens that may be God himself.

I read an egalley of this through Netgalley but am so impressed with the story and the absolutely gorgeous art that I have bought a real copy and intend on continuing with the series.  There are already three spin-offs on the go featuring specific superheroes introduced here.  One of the best GNs I've read this year.
Labels: 2012 fantasy graphic novel superheroes YA