278. Last Days of an Immortal by Fabien Vehlmann 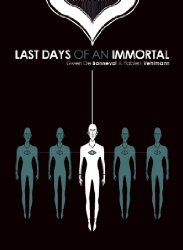 Last Days of an Immortal by Fabien Vehlmann. Illustrated by Gwen de Bonnevval. Translted by Edward Gauvin  (US) - (Canada)


Publisher's Summary:  "In the distant future, Elijah is a member of the “Philosophical Police,” who must solve conflicts that arise out of ignorance of the Other. Two species are fighting a war with roots in a crime committed centuries ago, and Elijah must solve the crime and bring peace between their species, while also confronting his own immortality in a world where science provides access to eternal life. In a world where death no longer exists, why do so many want to give up on life? Serious, heavy duty science fiction, with shades of author J.G. Ballard and the films Gattaca, Solaris, and George Lucas’ THX 1138."


Acquired: Received an egalley from the publisher, through NetGalley

Reason for Reading: "The premise sounded intriguing, I like crime/detective fiction, science fiction and this also sounded like it would have a dystopian vibe.  All things that interested me.

I was pleasantly surprised when I opened up and started reading with how much I loved the art.  It was astonishingly stark and understated and yet fully drew one into the story.  This is a prime example of less is more.  In this future world which is our Earth, people no longer die as we know it.  By accepting certain memory loss one can transfer ones brain data into an "echo" of oneself and live indefinitely.  Here characters were aged well into their 400's. People can use technology to change one's appearance, experience physical pleasure and clothing is a personal style and even optional.  Many alien nations have joined the "community" and Elijah's job is to keep the peace between species though psychology and philosophy.  This is his story, of the several cases he is working on at once and how a few personal problems affect his own psyche and the eventual choices he makes.  The dystopian reality of this society is presented simply in the life and legal rules of this society.  The author never brings any judgement upon them, yet due to choices made by certain characters and the readers reasoning in evaluating such a state of being, one can see all the possible fears in this current generation come true within this age where many issues of life must be dealt with if immortality is to be the order of the day,  A compelling and page-turning read.  Of note, this book is very much rated "M" for ages 18+; there is language, frontal nudity of both s*xes, and while artistically rendered, still graphic, s*x scenes.  The language bothered me but the rest was not gratuitous.  Recommended for those looking for a thought-provoking graphic story.
Labels: 2012 dystopia graphic novel science fiction