273. The Impossible Rescue: The True Story of an Amazing Arctic Adventure 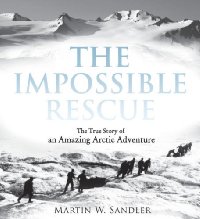 The Impossible Rescue: The True Story of an Amazing Arctic Adventure by Martin W. Sandler - (US) - (Canada) - (Kindle)


First sentence: "The book you are about to read tells the story of one of the world's most amazing adventures, a saga based on arguably the most daring rescue plan ever devised."

Publisher's Summary:  "In 1897, whaling in the Arctic waters off Alaska’s coast was as dangerous as it was lucrative. And in that particular year, winter blasted early, bringing storms and ice packs that caught eight American whale ships and three hundred sailors off guard. Their ships locked in ice, with no means of escape, the whalers had limited provisions on board, and little hope of surviving until warmer temperatures arrived many months later. Here is the incredible story of three men sent by President McKinley to rescue them. The mission? A perilous trek over 1,500 miles of nearly impassable Alaskan terrain, in the bone-chilling months of winter, to secure two herds of reindeer (for food) and find a way to guide them to the whalers before they starve. With the help of photographs and journal entries by one of the rescuers, Martin W. Sandler takes us on every step of their riveting journey, facing raging blizzards, killing cold, injured sled dogs, and setbacks to test the strongest of wills.

The dead of Arctic winter. Whaling ships full of men, stranded in ice. Follow three rescuers in a race against time -- and all odds -- in this heart-pounding true adventure."


Acquired:  Received a review copy from the publisher.

Reason for Reading: This book covers many of my interests; the time period, true tales of survival and life in the Arctic.  I had not hear of this true story and it appealed to me.

When first setting eyes upon this book, the thing that strikes one is the coffee-table book appeal.  The book is an over-sized square and illustrated on almost every page with contemporary photographs taken by one of the rescue members, Dr. Call, from start to finish.  This is an amazing photographic memorial to this amazing rescue attempt.  Nothing like it had ever been attempted before but public outcry at the dire strands these hundreds of whalers were caught up in prompted then President McKinley to form a rescue mission with objectives but no true sense of how these objectives were to be met.  That was left up to the handful of men eventually left in charge of the overland rescue mission.

An enthralling story to read about, the whalers were often there own worst problem as the cold, hunger and lethargy left them with low morale and little sense of self-preservation.  Sandler has presented the tale by using the rescuers' own words as much as possible.  Culled from their own journals which they kept upon this journey.  Sandler himself does not have exactly the most favourable voice for telling a story and the segues he's written connecting the contemporary voices can be a bit dry; but fortunately the rescuers do most of the story telling.  An extremely harrowing journey and rescue which, in reality, had very little chance at success, yet due to the character and determination of those involved succeeded despite the odds.  The publisher recommends for Gr. 5+, personally due to the writing style I would recommend most for Gr. 7+.  However, it makes a fine read for history or adventure buffs of all ages interested in the topic.