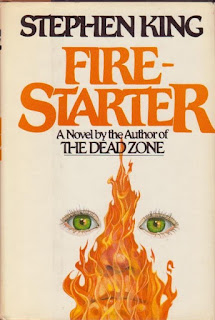 Publisher's Summary: "Innocence and beauty ignite with evil and terror as a young girl exhibits signs of a wild and horrifying force."

Acquired: Purchased a used copy of the exact same copy I used to have, from a secondhand bookstore.

Reason for Reading: I am re/reading King's works in chronological order.  This was the next one in line.

I came to this book with no great excitement as memory of it was fairly clear.  I was 12 or 13 when I read it and don't remember it having any special effect on me, except that I did fairly enjoy it.  I have since, of course, seen the movie, and think this drastically affected my re-read.  I don't really remember the movie much except for the big fire scenes, the girls hair standing out on end as if charged with electricity and the simple fact that the little girl, Charlie, was 9yo Drew Barrymore.  As soon as Charlie is introduced on page one, I had an image of Drew Barrymore in my head that would not let go, and when characters spoke of what a pretty woman Charlie would grow up to be, I immediately thought yes, she has grown up to be a beautiful woman and the current Drew Barrymore's image would enter my head.  I couldn't separate the two.    This is only from seeing the movie once in my life in 1984, when it originally came out.  So this did affect my reading.

Also, this book just doesn't live up to what King has written so far up to this point.  It certainly wasn't scary or even thrilling.  A father and daughter on the run from a government agency "The Shop", for almost half of the book was not exactly exciting.  I can't say I took any particular liking to Andy McGee either.  His choices didn't seem logical to me.  After they are caught, the secret government agency stuff is intriguing but something that has been done a lot by this time (2012) and just didn't have me thrilled.  Mildly entertaining, at the most.  John Rainbird, is supposed to be an evil terrifying character but I also couldn't get an image of him in my mind.  Native actor Tom Jackson kept popping into my mind as an image of the character but he's too nice to play such evil and I couldn't remember who played him in the movie.  Now I've just looked it up on imdb and found out that George C. Scott played the Indian! (yikes! no wonder I couldn't get a clear picture!)  It took me a week to read this book, and by my reading standards that is incredibly slow.  The story is ok, but nothing more.  I'd say this is King's first low point in his career after the steady climb of his first five excellent novels (under his own name.)

PS. - I'm looking forward to the coming line-up, next is a Bachman Book "Roadwork", which I can remember exactly zilch about, then comes "Danse Macabre" King's first non-fiction biographical work.  This is the first King I bought brand new off the shelf!   (I will be collecting names of books and movies throughout this read this time for sure!) and finally one I have been waiting for to come up, "Cujo".  I'm terrified of dogs and this book certainly didn't help with that!
Labels: 1980 horror science fiction