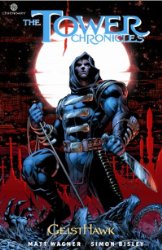 First sentence: "The night air is sour and thick"

Publisher's Summary:  "He Lives to Kill the Dead! Written by Matt Wagner, award-winning creator of Grendel and Mage, and developed with Thomas Tull, executive producer of 300 and The Dark Knight, The Tower Chronicles is the tale of John Tower, a supernatural bounty hunter who tracks down the creeping shadows that the modern world has all but forgotten. His harrowing missions lead him across the globe and into the darkest recesses of mankind's most dangerous places to banish a wide variety of poltergeists, demons, and other unfathomable evils to free his troubled patrons from their tormentors' ethereal grasp."

Acquired:  Received an egalley from the publisher, through Net Galley

Reason for Reading: Seemed to include all the elements I look for in a good fantasy graphic and I did like the cover :-)

This is a short novel at only 72 pages so it doesn't really have time to not be working at full force but I did find the "prologue" to be a bit confusing though it was certainly full of action.  I wondered if perhaps it was going to be action with not much else but as the first real chapter begins action takes a back seat as John Tower is introduced to us as the supernatural bounty hunter he is and this time his client is basically the mob who wants to make certain someone is really dead.  He takes the case but in the meantime a female detective on a serial killer case goes to Tower as a last resort, not that she believes in his supernatural mumbo-jumbo.  Reluctant to help the police, as Tower has a mysterious background, but once he sees the case files he knows what he's up against and takes the case.  It becomes an even more exciting story as he works these two cases very differently bringing each to a satisfactory conclusion and yet the book ends with a glimpse at mystery still to come in the next volume.  The artwork is fantastic, the colour tones suit the mood, the violence is gross but not over the top and both John and Harwicke are certainly easy on the eyes.  Looking forward to more backstory in the next volume, just why is John compelled to do this, and perhaps a longer book.  72 pages is over pretty fast.
Labels: 2012 fantasy graphic novel horror paranormal