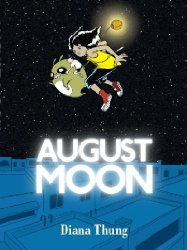 Publisher's Summary: "The townspeople of Calico believe in the legend of the Soul Fire—orbs of light dancing through the night sky, believed to be the souls of dead ancestors watching over the town. But when young Fiona Gan comes to town with her dad, she learns the amazing truth: these "fireballs" are actually the light from lanterns carried by mysterious rabbit-like creatures as they leap across rooftops! Leaping with them is the peculiar street boy Jaden, who rarely speaks and claims to come from the moon. But the games may be coming to an end, because Fi and her dad are not the only newcomers to Calico... when a creepy corporation starts bulldozing the nearby forests, she finds herself uncovering a whole world of secrets, and drawn into Jaden's battle for the soul of a community.

Diana Thung's debut Top Shelf graphic novel is a true adventure, rooted in the diverse local traditions of Asian festival culture, with a modern sensibility and a hint of magic."


Acquired:  Received an egalley from the publisher through NetGalley.

This is such a unique book and story that I'm quite literally at a loss to review this one.  I enjoyed it immensely.  It is a simplistic story, yet there is so much that is not said, that is implied, that is shown in the eyes of the characters.  At first glance with the cute bear-bunny characters and the abundant children one may assume this is a children's book, but it's not.  There is the use of language not appropriate for under young adults and the theme of coming to terms with death, and coming of age are not light.  The story looks cute on the surface, until one sees the guns, and perhaps notices a cute bunny creature gets killed.  It is cute in parts, the songs the children sing are catchy.  I had soon given the Lilliput song a tune and sang it in my head every time it came up.  The night adventures of the Jaden and the creatures are whimsical.  But overall, the story surpasses cute; it is poignant, slightly frightening, powerful yet subtle.  A read that made a big impact on me.

Another thing of note is that having the manga look I first assumed the book was set in Japan, but then noticed customs that appeared Chinese and so I started looking carefully to see where the story was supposed to be set.  I was feeling towards China and yet there were characters who had a distinct islander flavour to them, that I could not place the story at all.  So I found myself looking up the author to find that she is Indonesian, lived in Singapore and now lives in Australia.  She has certainly included her own diverse background along with others to create a uniquely Asian world that combines many cultures to purvey an  Asian centric world built of her own imagining.  Very intriguing.  Recommended!