Short Story: "We are the Fine Musicians" by Paul Darcy Boles 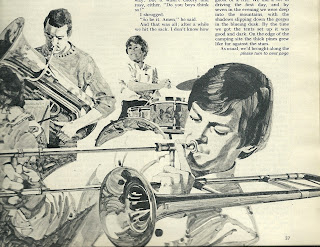 Last Sentence:  But when people listen hard, nobody has to be killed.


Searching for this author brings up many hits but not much *about* the author himself.  He does however merit a paragraph obituary in the New York Times as "an award-winning novelist and short-story writer".  The one thing of note other sites seem to be in agreement over is that this American writer is noted first and foremost as a short story writer.

This is a simple, quaint story but I enjoyed it very much.  It has a youth as the narrator and could be a young adult story if printed in a teen magazine but since its intended audience here would have been mothers, one can see the story as an effort to bridge the generation gap between a parent who grew up during the big band era and the current Beatles culture.  The parents in this story are musical, father plays a variety of instruments while the mother bangs out a tune on the piano while singing very well.  Basically as soon as each of the four boys is out of diapers they are taking musical instrument lessons and the family forms a band.  They perform two public functions each year for friends, family and neighbours, one in the spring and the other at Christmas.  The family bonds and has a great time year after year until the two eldest reach their late teens; they've been playing modern music on the side and are balking in themselves at playing this old "big band" repertoire year after year.  One spring, around midnight at the annual gathering they let loose with the younger two joining in playing music like the Beatles.  Well mother and father are flabbergasted, but the audience gives a surprised spattering of applause and a few handshakes.  It happens again at Christmas, but this time the audience goes mad with applause, back slapping, etc.  That evening the two eldest and the parents have a talk which leave the parents befuddled.  They had tried to talk about music, "melodic line"; each side mentioned *names* to bewildered head shaking from the other side.  The generation gap is too wide.  No one is mad but things have changed.  Next function, the older two simply do not approach the stage, they mingle with the audience, pass out drinks, act as hosts.  The parents submit to their "strike".

That summer the family goes on its annual camping trip, bringing along an instrument each as usual.  The first evening the older two take the dog for a walk in the woods.  They go a good pace and realize the dog has taken off; much time goes by before they find him again and at this point they are lost and find they haven't brought the compass with them.  Several hours have gone by and it is during this episode that the family's love for music rescues them and the gap between the parents and eldest children narrows as they learn about giving, taking, and compromise.  A sweet, quaint story with an enjoyable writing style.
Labels: 1971 short stories women's fiction YA