Short Story: Some Kind of Piggery Jokery by Molly Miron 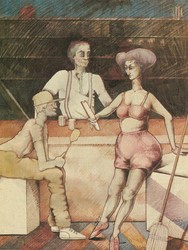 Some Kind of Piggery Jokery by Molly Miron
a short story

After the story, the author blurb tells us Molly Miron is a regular contributor to the magazine but that this is her first published piece of fiction.  She also lives near Upper Kennetcook, Nova Scotia.

This is a quaint, rural, humorous story.  The narrator has lived in the area for a year on a run-down farm she and her husband are fixing up and are considered newcomers, however, there are newer people living further down the road from them letting that status go slightly as it has settled on them.  These newcomers live beyond the town line, with no "hydro", are hippie-type people, vegetarians, teetotalers who smoke some illegal herb, and are Jewish.  Enough there to catch the attention of this white-bread rural town where everyone knows every one's business.  The Jew aspect would have been an issue for conversation, since probably most of the residents had never seen a Jew before.  But the Seplowitz's vegetarianism overshadows that eccentricity by a landslide in this farming, meat-eating community.  And if the town residents weren't eating meat they could be found drinking home-brew or moonshine depending on the person, so the Seplowitz's way of life was totally obscure and cause for gossip in town.  As far as religion went, they were lumped together with the handful of other townsfolk who didn't attend either of the two churches atop the big hill, the Anglican or the United.

The townsfolk certainly has its gossip cut out for it but none of these characters are the subject of the story.  Joyce Seplowitz has a baby and invites her widowed mother down from New York.  Well here she arrives with a bouffant hair-do,  pink halter top, pink shorts and pink tennis shoes, like nothing seen in town before.  The menfolk have never seen so much flesh on public display on a woman, not that they are complaining.  Six weeks later, the latest news is that quiet, keeps-to-himself, Jamey-the-pig-farmer has been shacking up with said mother, Edie Kaufman for three weeks.  Neither of the two are religious so her Jewishness is not an issue.  To make a long story short they get married about 6 months later, Edie has become a real pig farmer's wife and they are a happy couple. It isn't until the wedding when an itinerant pastor passing through town brings up the Jewish issue, to which Edie replies  about herself and daughter, "Oh, we're both good Old Testament Christians."

A contemporary story at the time it was written of people going back to the land, to live off the grid, live off the land.  Something that has once again become popular with certain elements of society today.  The story has a homey, small town feel to it as the general store is the gathering place and besides the main characters, there are several other minor characters who have their places in the town's hierarchy and can be found at the store passing the time of day.  Being read today to story is nostalgic for its quaintness.  There are still out of the way rural towns which have not been infiltrated with all the technologies of modern life but they are no longer secluded or excluded from them.  People are more aware today of what is going on around them and if they want to bring the outside world in they can, will and do, easily enough.  An enjoyable nostalgic piece and quite humorous.
Labels: 1979 Canadian author humour short stories