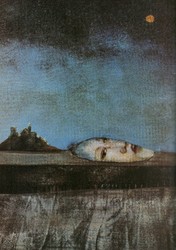 A quick search for the author lets me know Malzberg is a prominent science fiction writer of both novels and, it seems mostly, short stories.  Descriptions of his work make this story seem typical of his style: dystopian, metafiction with a single obsessive character. (gleaned from wikipedia)

At first this story had me rolling my eyes as it is the type of science fiction I don't like.  Rambling on about the political situation and internal musings of the narrator that I was soon becoming lost and not even understanding what he was talking about.  Then in his tale he starts presenting the dialogue between himself and his, at the time, lover.  This episode being the purpose of his narrative, I became interested and continued to read.

The story is set in a dystopian future, some time ahead of the current date, though we are to note that the situation has gone on for many years as the date 1988 is referenced in the past, only short years in the future of the date of the story's publication.  This is a future still within the throws of the Cold War and rampant Communism outside of the West.  The narrator is a writer, proud of his work, for the government, a somewhat clandestine career in which he writes "captured secret documents" in languages of the Eastern Bloc countries to be purposely found as directed by the Western government.  He becomes involved with a woman he begins to like.  Relationships in this future are purely s*xual in nature and usually conversation, communication and concern don't enter into them, but this woman he's found, through a service of course, wants a sharing relationship so he tells her what he does and she is disgusted, calling him a "functionary".  The conversation continues as he tries to explain the importance of his job, its necessity, the good he does for the nation as she becomes more and more horrified and hysterical.  Throughout the narrator stops to soliloquize  personal observations of the situation that glorify his righteousness and cast blame on her "craziness".  Finally the woman hits a nerve and the narrator is overcome with anger and takes care of the situation.  He immediately goes to his supervisor who tells him he's been a fool in disclosing the nature of his work and the department will take care of the current situation.

This is not my type of story at all.  I was curious if it would end the way it did as it felt out of character for the narrator but seemed to be heading in that direction.  I'm not really familiar with "metafiction" but this story about a writer never stopped comparing his situation to the the writing process, talking a lot about characterization especially, this I'm assuming is an example of metafiction.  I'm not really impressed with the story, though halfway through it turned into something readable for me.  I'd never go out and read something by this author on purpose, though I would read another of his short stories if I came across it in a collection.
Labels: 1985 dystopia science fiction short stories