GIVEAWAY: Until We All Come Home by Kim de Blecourt

Giveaway! One copy of the true rivetting story of adoption from another country: Until We All Come Home by Kim de Blecourt.  Contest is open to Can/US only and you must have a street mail address, no PO Boxes.  Fill out the form below to enter. 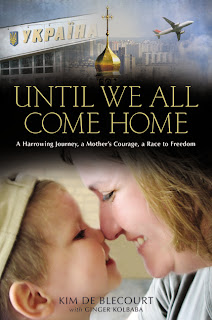 Until We All Come Home, by Kim de Blecourt
FaithWords, November 6, 2012

Book Description
When Kim de Blecourt and her husband decided to adopt a child from Ukraine, they knew that the process might be challenging. Nothing, however, could have prepared de Blecourt for the twisted nightmare she would endure. During her year-long struggle to extricate her newly adopted little boy from that post-Soviet country's corrupt social service and judicial systems, de Blecourt was insulted, physically assaulted, and arrested. Worse, her months of loneliness, worry, and fear drove her to the brink of spiritual despair. But God had no intention of abandoning de Blecourt or her family. Her amazing story-culminating in a spine-chilling race to freedom-offers dramatic proof that God's light shines on even in the deepest darkness. 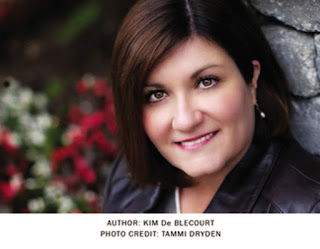 An Excerpt from Until We All Come Home

Fear gripped me as my children and I arrived at the Ukraine-Moldova border crossing. It was busy for a Sunday afternoon. Guards were everywhere, automatic weapons tucked at their sides, snarling dogs at their feet. The guards looked irritable, as though the amount of traffic was bothersome.

I’d passed through this border dozens of times in the past year— a wedge of Moldova encroaches into Ukraine between Odessa and Izmail, directly over the road I had to take back and forth on adoption business. But the passengers jamming the buses I rode had always shielded me. Today, I couldn’t hide among the sea of faces.

Breathe, I told myself. Act normal.

But I was anxious. Had the prosecutor gotten word to the border control that I was leaving with my Ukrainian son? Would they have a copy of the outdated warrant with my young son’s name on it?

I stole a glance at our driver, Sasha. En route to the border, he had tried to reassure me that everything would be fine; he would take care of us and get us into Moldova. I sought reassurance from him now, but found that his easygoing smile was gone. In its place was a stern, intimidating look. His chiseled jaw was clenched and the muscles along his jawline twitched. His tan arms were grasping the steering wheel so tightly that I could see the outline of every muscle there.

God, please take care of us, I prayed. Please get us out of here. You are faithful.

Even though I knew Sasha was a man of faith, how well did I really know him? I had met him barely two hours earlier. Friends who’d introduced us had told me few details about him other than that he was a quick thinker, a skilled kick-boxer, and a competitive knife fighter who refused to flinch in the face of danger. Could I trust that he would be true to his word to help us? I thought so. I hoped so.

As we pulled to a stop I could feel my muscles tensing and quivering uncontrollably.

My eyes scanned the line of silver, black, and white cars ahead of us. A soldier in fatigues interrogated passengers as he stood at the driver’s side window of a car at the front of the line. He shifted his weight and casually slung his machine gun over his shoulder, a constant reminder of who held power.

I took in the other soldiers patrolling the congested checkpoint. A few were clustered together chatting casually. Others were interrogating the drivers and passengers. About a half dozen officers kept a firm grip on German shepherds that tugged at their heavy chain- link collars, sniffing and growling every so often. With every move the guard dogs seemed eager to tear at something . . . or someone.

My fear mixed with resentment. For the past eleven months, I had lived in a constant state of unknowing, dread, and apprehension. But today it was magnified; my life and the lives of my children were on the line.