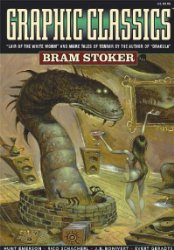 First sentence: "My Very Dear Mr. Stoker, Please regard this as my Modest Proposal for a New Dramatic Presentation of Dracula:"

Publisher's Summary: "Graphic Classics: Bram Stoker is the seventh in a series of books which present great literature in comics and heavily illustrated format by some of the best artists working today in the fields of comics, book illustration, and fine arts. The book includes comics adaptations of "The Lair of the White Worm", an excerpt from Dracula, plus six other great stories by the great writer, Bram Stoker."

I had to ILL this volume and was a little disappointed to see I received the 1st edition (now out of print) as a more recent 2nd edition has been updated.  But beggars cant be choosers and I'm just appreciate of my library system that they are able to get hold of about 95% of the books and movies I request through them.

The publisher's website describes the changes in the second edition so I'm able to know how this one differs.  First off, I have read Dracula twice and while I don't recall, I must have read a short story of 2 of Stoker's in the numerous anthologies I've read over the years.  That said only one story in this book was familiar to me "The Judge's House".

This book has some fun with Dracula, starting with an introductory letter to Mr. Stoker entreating him to put his book into ballet form (which it has been).  Then there is a graphic adaption of Dracula's voyage across the sea, this was not very impressive, a Dracula Gallery consisting of art illustrating a quote from the book.  Lovely art but again not so impressive and finally a supposed Vampire's Guide written by Van Helsing, comic and cute.  These Dracula parts of vol. 1 have been removed, except the Vampire Guide, and replaced in vol. 2 by a full graphic adaptation of the novel.  For this reason if I came across the second edition, I would read it for this alone.  The rest of the two books are the same minus two small items.  Lair of the White Worm, Torture Tower, The Judge's House and The Bridal of Death have all been graphically adapted.  I absolutely adored Lair of the White Worm and The Judges House. Torture Tower was good, quite Poe-esque but The Bridal of Death was strange.  The Wondrous Child has been presented differently, as an edited short story with several illustrations.  I don't mind reading a book of illustrated short stories but I'm not impressed with editing them and it really had no place here in a graphic novel, besides they kept this story, while deleting The Funeral Party and The Duelists also written as a short story, and I would have rather have had them keep the much more sinister and creepy Duelists.

I enjoyed all the artwork. Done in black and white it suits the macabre nature of the stories.  There are many artistic styles presented but they are not so far apart that they mesh together nicely, coming together in a nice cohesive.  I didn't even mind J.B. Bonivert's artwork this time, though I still don't care for it!  Otherwise well-done and I am now a big fan of Stoker and must make sure I read more of him.  His short stories are comparable to Poe.
Labels: 2003 graphic novel horror short stories YA