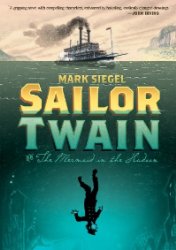 Sailor Twain or The Mermaid in the Hudson by Mark Siegel. (Canada) - (US)

Publisher's Summary:  "One hundred years ago. On the foggy Hudson River, a riverboat captain rescues an injured mermaid from the waters of the busiest port in the United States. A wildly popular--and notoriously reclusive--author makes a public debut. A French nobleman seeks a remedy for a curse. As three lives twine together and race to an unexpected collision, the mystery of the Mermaid of the Hudson deepens.

A mysterious and beguiling love story with elements of Poe, Twain, Hemingway, and Greek mythology, drawn in moody black-and-white charcoal, Sailor Twain is a study in romance, atmosphere, and suspense."

Reason for Reading:  Set in the 1880s, I wasn't about to pass this one by as it sounded just to my tastes.

Phenomenal!  One of my favourite graphic novels of the year.  This is a haunting, gothic story set in Victorian era New York, or to be more exact on a steamer upon the Hudson River.  From the beginning prologue, the book is surrounded in mystery.  The fog that fills the graphic panels also hovers heavily over the plot.  Atmosphereic only begins to describe the aura one feels reading this book and I'll say that it didn't take me long before I forgot I was reading a graphic novel, per se.  I was totally invested in these characters and the story was compelling, a real treat for someone looking for a spooky ghost story that involves much more than ghosts.  On top of that the book examines love in its varied forms, how can one truly hang on to it, is temptation always too much to handle or can a certain kind of love stand against it.  I was mezmorized while reading Sailor Twain and will be keeping this for a second read later down the line.

Be forewarned though that this is an adult book with frontal n*udity of both s*xes, and has s*x scenes.  I thought they were represented very tastefully, just not something I would hand to anyone without knowing where their limits lay in that direction.  Also there is cursing, including multiple use of the F-word.
Labels: 2012 graphic novel historical fantasy magical realism Victorian