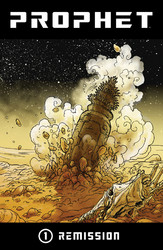 
First sentence: "Dusk is approaching by the time the tulnaka finds this place, still hungry after a fruitless day of foraging."

Publisher's Summary:  "On distant future Earth, changed by time and alien influence, John Prophet awakes from cryosleep. His mission: to climb the the towers of Thauili Van and restart the Earth empire. News of the Empire's return brings old foes and allies out of the recesses of the vast cosmos.

This is going to be a short review as I plan on keeping it short.  The volume confused me.  I really had no idea what was going on.  Apparently each "chapter" a new John Prophet would appear and start the story all over again waking from stasis from under the earth's surface to complete a mission in this new dangerous Earth.  This took me some time to figure out so I didn't have a clue what was happening with each issue shift.  Sometimes I wondered if it was the same book or some sort of error.  The art is so different issue to issue that it also threw me off track.  I don't mind a couple of artists working on a project but four, which each working on separate issues it just confounded my confusion.  This GN is not for me, nor would I recommend it.  However it generally seems to be getting excellent reviews.  I enjoy science fiction but I am not hard-core, perhaps this would appeal more to those associated with that term.