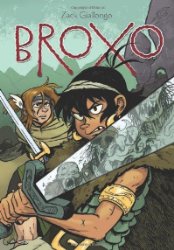 Broxo by Zack Giallongo (Canada) - (US)

First sentence: "And so I've climbed Peryton Peak ... for nothing."

Publisher's Summary:  "In this wildly entertaining fantasy debut we meet Broxo, the only surviving member of a tribe of barbarians who once occupied a now-desolate mountain. All alone in the world, Broxo spends his time on the mountain hunting and avoiding the man-eating walking dead that periodically drag themselves out of a fetid lake.

Everything changes when Zora, a foreign princess, arrives on the mountain seeking Broxo's lost tribe. Can the two young warriors together defeat the living dead?

With accessible and beautiful art, killer fight scenes, and a story that mixes humor, romance, and classic high fantasy, Broxo is a tale you're sure to enjoy."

Reason for Reading:  I seem to be taking a break from fantasy these days but this "classic high fantasy" appealed to me and I was hoping it would be suitable for my son.

I really enjoyed this novel.  Not only on my own level but once I got into the story I also started reading with an eye out for my son's appreciation, as a struggling reader needing high-interest stories this fits the bill to a "T".  Broxo is a wonderful "quest" fantasy.  Set in an alien humanoid world, Zora sets off to prove herself to her family by helping to reunite the five realms in search of the lost tribe of Peryton.  Here she meets Broxo, a warrior of her own age and his pet, a gigantic snow beast.  They are not quick to make friends, both being quite self-centered and egotistical; but as events unfold and they come to realise they need each other's attributes to succeed they become friends.  They meet up with a mysterious non-human woman whose status of evil or good is questionable, a horde of zombie-like people, the ghost of an ancestor and a beast out to get Broxo to revenge his mother's death.  All the while, the mystery as to what happened to Broxo's clan which disappeared when he was a baby must be solved.  An entertaining story with plenty of action.  With both a male and female main character it should appeal to everyone but Broxo himself is the scene stealer along with his ginormous (yet somehow cute) pet.  The battle scenes are intense with blood but no gore and the suspense of the story is maintained throughout.  All the characters are sympathetic to the reader and this is a very satisfying read.  Completely age appropriate to the recommended age group and well beyond.
Labels: 2012 fantasy graphic novel MG